The Florida Cabinet on Tuesday delayed action on a proposed transfer of 29,412 acres in Big Cypress National Preserve to the federal government after state Agriculture Commissioner Charles H. Bronson raised concerns about management of the land.

Big Cypress National Preserve is part of the Everglades and covers 729,000 acres in southwest Florida. After Congress established the initial preserve of 540,000 acres in 1974, the state agreed to donate state-owned lands within Big Cypress to the National Park Service. An additional 179,000 acres were added in 1988, including more than 29,000 acres of state land.

But Bronson said the Cabinet should wait until preserve officials complete a management plan for the 179,000 acres, including the state-owned property. 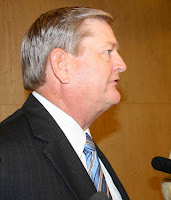 Bronson said he's concerned that the additional property will be designated as a "wilderness." He said that means mechanical equipment would not be allowed, preventing adequate control of wildfires and removal of exotic plant species. That would harm surrounding private land, he said.

"Non-native invasive species are killing our environment," Bronson said. "They are absolutely destroying native species, and those have to be put under control as best as they can before we lose this whole fight."

The state is working closely with the agency and must approve the transfer before an environmental site assessment for the property expires in December, Florida Department of Environmental Protection Secretary Mimi Drew said.

"We are quite anxious," she said. "It is a great environmental project. It is a great project that unites all of the agencies."

Bronson also raised concerns about whether hunting will be allowed within the addition. He said he couldn't vote on the transfer until he has seen a final management plan.

"I think what the commissioner has asked is fairly reasonable," Attorney General Bill McCollum said.

Representatives of The Nature Conservancy and Audubon of Florida urged the Cabinet to take action. The groups also want the state to use $4 million it will receive from the National State Park Service for the Big Cypress property to buy other land through the Florida Forever program.

"The reality is the management plan and conveyance (transfer) are two different issues," said Julie Wraithmell, wildlife policy coordinator for Audubon of Florida.

McCollum made a motion to delay action at least until National Park Service officials can speak to the Cabinet. "I have no problem bringing it back, but there is no assurance you will get my vote," McCollum told Drew.

A spokesman for Big Cypress National Preserve said the agency will allow for the control of exotic species within the proposed addition. He said preserve officials plan to be present at the next Cabinet meeting to address the issues raised.

"When we have the opportunity to address their questions directly, we feel confident their concerns will be alleviated," said Bob DeGross, preserve spokesman.

I support any additional lands being added to Big Cypress National preserve. This incredible ecosystem and the animals that inhabit it need all the room we can give them. Haven't we spoiled and developed enough. Lets think to the future and preserve all we can, there can be no down side to this.
Donna Glann-Smyth
Florida Master Naturalist