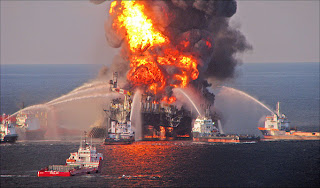 There were reports of an oil sheen on the Gulf surface but it was unclear whether the rig was leaking, according to a report by the New Orleans Times-Picayune. The Mariner Energy rig is about 90 miles south of the Louisiana coast and is west of the Deepwater Horizon rig that sank in April, causing one of the nation's worst environmental disasters.

Cretul had created the work groups on July 21 when the House abruptly adjourned a special session without taking action on Gov. Charlie Crist's request to put a constitutional oil drilling ban on the ballot before voters in November.

Rep. Adam Fetterman, D-Port St. Lucie, said Thursday in response to the new oil rig accident that Republicans state leaders have shown they are ignorant of the consequences of drilling and deaf to the concerns of local business owners and tourists.

“It’s said that the public has a short memory, and once a disaster is over, they move on to the next issue," Fetterman said in a statement. "Well, that’s exactly what the so-called [Republican] 'leaders' in Tallahassee are hoping."

"I'm disappointed that Representative Fetterman would resort to using empty election year rhetoric and playing politics with an issue that seriously impacts so many families and businesses in Florida when earlier this week he told his colleagues otherwise," Dorworth said.

Also Thursday, the National Oceanic and Atmospheric Administration reopened 5,130 square miles off Florida, Alabama and Mississippi to fishing after samples showed the fish are safe. NOAA also reopened an area off the Panhandle that had been reopened last month for fin fish only. The closest remaining closed areas appear to be about 40 miles off the coast at Cape San Blas in Gulf County and about 60 miles off the rest of the Panhandle. (Click here to view maps.)