Cleanup of some oiled Florida beaches may cause more harm 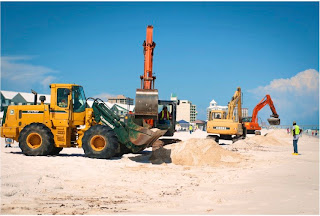 Federal officials are beginning to leave alone some beaches that still have oil in sand below the surface because further cleanup could cause more environmental harm, the National Oceanic and Atmospheric Administration said Wednesday.

The explosion and sinking of the Deepwater Horizon oil rig in April led to oil washing ashore on beaches along the western Panhandle in June and July.

Federal officials are gradually ending their cleanup operations at some Panhandle beaches. But they plan to continue monitoring the Panhandle coast and will begin a new shoreline assessment in 2011, said Liz Jones, NOAA's scientific support coordinator.

"To be clear, achieving this stage doesn't mean we are reaching an end point," she said. "It just means that we fully expect, during the coming winter, storms may uncover additional subsurface oil that can be cleaned up as it appears on the shore." 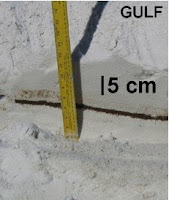 While oil stopped gushing from the well off Louisiana on July 15, scientists say some oil that washed ashore during the summer remains below the sand in Florida beaches along the western Panhandle.

NOAA representatives told reporters they dug more than 2,000 holes in Escambia County looking for oil beneath the surface. Oil has not been found below the surface east of Okaloosa County, a BP contractor said.

At residential amenity beaches such as Pensacola Beach, Fort Walton Beach and Destin, there is an effort to remove all oil on the surface or buried in the sand, Michel said. Recreational state park beaches also fall into that category.

In nonresidential areas that have less public use, such as Eglin and Tyndall Air Force bases, the agency will not be as aggressive, Michel said.

The cleanup guideline, she said, for nonresidential and "special management" beaches is less than 1 percent visible oil and no tar balls or tar patties over certain sizes, she said.

At those nonresidential beaches, minor amounts of oil beneath the surface will not be dug up, Michel said.

The "special management" beaches include national parks and state beach preserves. Park managers are concerned that an aggressive cleanup could affect the animals that live on the beach.

"We are going to be less aggressive in removing the subsurface oil on these beaches because that really does disturb the habitat," Michel said.

A BP contractor said a breakdown of the miles of Florida beaches in each of the three categories was not available.