A dispute between Gov. Charlie Crist and the Legislature over funding for a solar rebate program escalated Wednesday as House Speaker Larry Cretul suggested the governor's administration had been "duping" applicants into believing they would receive checks.

Crist sent Cretul and Senate President Jeff Atwater a letter on Tuesday saying he was disappointed the Legislative Budget Commission did not take up his request to provide $13.9 million in federal economic stimulus dollars for the state solar rebate program and $17.5 million for rebates for heating and air conditioning system upgrades. On Tuesday, Senate budget chief J.D. Alexander, R-Lake Wales, said the commission could not legally take up the request because the Legislature had chosen not to fund the programs in the 2010-11 budget.

The solar rebate program pays up to $20,000 for solar residential panels on homes and $500 for solar water heaters. The program automatically ended on June 30 after the Legislature did not extend it during the regular session. In July there were more than 15,000 solar rebate applications totaling at least $52 million. The public has until Oct. 30 to submit applications.

On Wednesday, Cretul sent a letter to Crist saying that the governor had announced the $1,500 HVAC program in August knowing that funding had not been provided by the Legislative Budget Commission. He also said the Florida Energy and Climate Commission failed to inform applicants that rebate program had been out of money, "thus duping the citizens of Florida to believe they were eligible for a rebate that was no longer available." 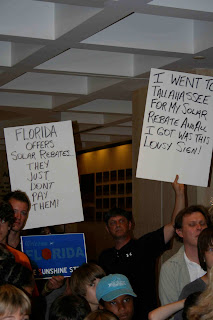 Protestors rally in May at the Florida Capitol in support of the solar rebate program.

"Not only did the FECC fail to notify the public timely or adequately that the funds had run out," Cretul said, "they failed to even post such notice on their website until months after the funds had been exhausted."

There was no immediate response from a Crist spokesman. FECC Chairman James F. Murley said he wasn't aware of the information posted on the website of the Florida Energy Office, which administered the program under the policy direction of the commission.

The dispute was shaping up as partisan by Wednesday afternoon. Rep. Darren Soto, D-Orlando, called on Cretul and Atwater to "save" the solar rebate program by approving the governor's requests. Former Rep. Loranne Ausley, a Democratic candidate for state chief financial officer, called on Atwater to approve the federal funding for the rebate programs.

The Florida Solar Energy Industries Association "urges the governor, the speaker and the president of the Senate to work it out," Association Executive Director Bruce Kershner said.

Story provided by the Florida Tribune. Story and photo copyrighted by Bruce Ritchie and FloridaEnvironments.com. Do not copy or redistribute without permission, which can be obtained by contacting brucebritchie@gmail.com.)
Posted by Bruce Ritchie at 9/15/2010 10:28:00 PM

Please ask the legislature's ,why and how they kept their knowledge that the program won't be funded,from the public?

Was it days or weeks,that they kept silent,duping consumers and A/C Contractors into spending thousands of dollars.

Was there a sunshine law violation? Why did Budget Committee members not question the program being left off the agenda??