With Crist's Senate bid, is his climate agenda dead? 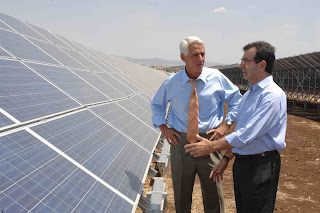 Gov. Charlie Crist this week announced his candidacy for the U.S. Senate -- raising the obvious question of whether his climate change initiative is now dead for all practical purposes.

Crist in 2007 delighted environmentalists when he signed executive orders calling for statewide reductions in greenhouse emissions.

But the Legislature in 2008 adopted a sweeping energy bill -- supported by Crist -- that required legislative approval of any new auto emissions standards or renewable energy requirements. And bills that would have accomplished both failed to win approval in the 2009 legislative session, which ended last week.

Crist's Senate bid announcement this week led reporters to begin questioning him on a variety of national issues. But Crist also said he doesn't think his climate agenda in Florida had been killed by the Legislature.

"I don't think so," he told reporters. "I think we press on. We've talked about trying to do some things maybe administratively. I think actually the Senate was rather favorable. We'll continue to move forward."

"Without him pushing for it, it won't have any momentum," deHaven-Smith said.

"He's not going to let it die entirely because he's interested in it," deHaven-Smith said. "On the other hand, you only have so much time -- and he is going to have to focus on his campaign."

Asked this week how he would juggle his duties as governor with his candidacy, Crist replied, "Very carefully."

Crist appears to face a steeper uphill battle now to win House approval. Republican leaders pushed through an oil drilling bill at the end of the session that the Senate refused to hear while the House refused to hear the energy bills that Crist supported.

The governor last week said he was considering taking additional action through executive orders to advance his climate agenda. Florida Department of Environmental Protection spokeswoman Amy Graham did not elaborate when asked this week what other new measures are being considered.

Last year, DEP adopted a rule restricting the idling of heavy trucks and other equipment in an effort to reduce greenhouse gas emissions. Meanwhile, the department is proposing an emissions cap-and-trade rule, with a workshop scheduled for May 18.

The department also is keeping an eye on whether the U.S. Environmental Protection Agency grants California a waiver for its tailpipe standards, Graham said, even though Florida can't adopt those standards without the Legislature's approval.

Industry lobbyist Wade Hopping said he thinks it's unrealistic for any state to implement its own cap-and-trade system or auto tailpipe standards and that the new Congress will be taking action on both.

"I will give the governor a lot of credit -- I think the rattling around the state of Florida and other states did on energy policy caused movement at the federal level," Hopping said. "And for that, they are to be congratulated. The question is, 'What is going to be the result of that movement?' "

Renewable energy advocate Susan Glickman said Florida should want to have a say in the national cap-and-trade debate by moving ahead with its own rules. And she said she finds it hard to believe legislators don't want to expand the solar energy market in Florida by requiring more renewable energy.

"I think we (advocates) have some homework to do," she said. "No one is suggesting the Florida Legislature will not be a place where energy will move forward. We just have to create a new understanding."