Following a tour of the Everglades today, Gov. Charlie Crist called on the U.S. Department of the Interior to take a "fresh look" at Everglades restoration and to conduct a comprehensive review of the downstream effects of water withdrawals from the Apalachicola-Chattahoochee-Flint river system.

Crist toured the Everglades by airboat with Interior Secretary Ken Salazar and U.S. Sen. Bill Nelson, D-Fla. In remarks and in a letter to Salazar, Crist acknowledged President Obama's request for $279 million for Everglades restoration in the 2009-10 federal budget, according to a statement from the Governor's Office. The 2009-10 state budget signed by Crist on Wednesday includes $50 million for Everglades restoration.

“It is especially important right now, to renew our commitment and cooperation to the federal/state partnership, and reaffirm our dedication to completing the projects needed to restore the River of Grass,” Crist said in his statement.

Salazar said today the Obama administration is committed to restoring the River of Grass, according to the South Florida Sun-Sentinel. Salazar said the administration has proposed "more than $600 million to fund ongoing projects and to generate good jobs in design, engineering, construction and rehabilitation work.”

Salazar’s trip to the Everglades was at the invitation of Nelson, who said it was important that the cabinet secretary see the "River of Grass" for himself, according to a statement from the senator's office.

“It really shows you something when the secretary of the interior comes down to South Florida to hear about why restoring the Everglades is so important, not just to Floridians, but nationally,” Nelson said. “And he didn’t just get to hear from us, we took him out on an airboat so he could see for himself.”

Crist also asked the Department of the Interior to measure the downstream environmental impacts caused by federal management of the Apalachicola-Chattahoochee-Flint river system. Alabama, Florida and Georgia have been fighting in federal court since 1990 over water from the rivers.

“This is a tri-state problem which requires a tri-state solution, and it is imperative that we work toward a long-term solution, or else we will find ourselves facing a crisis every year,” Crist said. “Florida recognizes that a solution must include an equitable sharing of adversity.”

On Wednesday, Salazar said he told Georgia Gov. Sonny Perdue he was willing to help mediate the states' water dispute. They toured the Lake Lanier reservoir on the Chattahoochee River north of Atlanta. 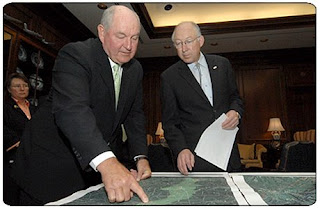 "I think the governor of Georgia has rightly pointed to the value of Lake Lanier to Georgia and the Southeastern part of the country," Salazar said, according to the Gainesville Times.

The governors of the three states failed to reach an agreement in 2008 when Interior Secretary Dirk Kempthorne tried to mediate at the direction of President Bush.