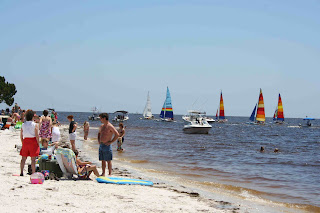 Environmental groups this afternoon issued statements expressing regret that the state's land-buying program next year will receive no state money or bonding authority.

Florida Forever and its predecessor land-buying program received $300 million a year in bonding authority or general revenue since 1990. The program led to the purchase of 2.4 million acres of state forests and other conservation lands, water projects and city parks.

Gov. Charlie Crist proposed full funding for the program in his proposed fiscal year 2009-10 budget. But the House and Senate, grappling with a $6 billion budget shortfall, cut the program while providing $50 million for Everglades restoration.

The state still can issue $250 million in bonds next year that were approved this year but were not issued because of the state's declining bond rating, said Sen. JD Alexander, R-Lake Wales and the Senate's budget chairman.

The Florida Forever Coalition acknowledged this afternoon that the program won't receive new money next year. The Florida Wildlife Federation, The Trust for Public Land and Defenders of Wildlife also issued a statement jointly saying that the $250 million already is allocated to existing projects and that local governments won't get money through Florida Communities Trust or other grant programs.

"Sadly, not even a nominal amount of funding that would indicate the Legislature's ongoing commitment to land conservation will be made available," the groups said.

Alexander said Monday the Senate hopes to provide funding next year if revenue from real estate and other document stamp transactions becomes available.

Read the Florida Forever Coalition statement by going to www.supportfloridaforever.org .

Here's a breakdown of how the $300 million for Florida Forever is allocated:

And it's too bad that Shell Point Beach gets no other funding to clean it up. if the photo was taken at the Shell Point regatta, a beach advisory was issued for that event.

Yes, that was Shell Point on April 25 when there was an advisory against swimming. See Floridashealth.com/beachwater . I don't think Florida Forever money would be used to clean up Shell Point or address the bacteria issues in the water there. That should be the topic of another story.