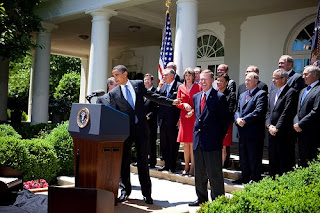 As part of his initiative in 2007 to reduce greenhouse gas emissions, Gov. Charlie Crist directed the Department of Environmental Protection to move towards adopting California vehicle tailpipe standards. But the Legislature in 2008 required that it give approval for any new vehicle standard, and then the House and Senate this year failed to take up a bill to adopt DEP's recommendation.

"We stand by the Obama administration's decision to adopt more stringent CAFE standards and share the belief that a unified national standard is the best solution for reducing greenhouse gas emissions from automobiles and minimizing the effects of climate change in Florida and nationwide," Sole said.

California is the only state allowed under the federal Clean Air Act to adopt its own automobile emissions standards. California Gov. Arnold Schwarzenegger attended Obama's White House ceremony to announce the proposal and later praised the new federal standard.

"It means people won't be able to run across the border form Florida to Georgia to buy cheaper cars, or they won't have any incentive to do that," Hopping said.

"We'll have to see what transpires now," said Liles, policy consultant to the Florida Wildlife Federation. "But it is very encouraging."