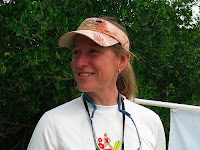 A 42-year-old New Jersey woman who is on a 1,000-mile paddling voyage on behalf of ocean protection met Gov. Charlie Crist today.

Margo Pellegrino left from Fort Pierce on April 15 in her outrigger canoe and stopped over the weekend in St. Marks, which is about the halfway point on her journey to Louisiana. She spoke with reporters at the Capitol today and met with Crist in what Pellegrino described as a positive meeting.

"I think he gets that Florida's economy really involves and depends on a healthy ocean and Gulf coastal environment," Pellegrino said. She describes herself as a stay-at-home mother of two who hasn't done a good job of staying at home.

Pellegrino told FloridaEnvironments.com that her journey has been tough at times, especially when paddling against the wind on the open water.

She said there have been some foul spots along her trip, such as a sewage treatment plant discharge in Sarasota and the Fenholloway River in Taylor County, which receives industrial wastewater from the Buckeye Florida pulp mill.

And she said highlights have been the coastal Everglades and the "Nature Coast" area between Crystal River and St. Marks. The area includes at least 70 miles of coastline that is managed by state and federal conservation agencies.

"I definitely told him (Crist) that (the Nature Coast) was an amazing, surprising treasure and something I had not expected," she said.

"And everyone I met along that way was totally into the idea," she said. "They know what a treasure it is they have and they don't want to lose it. Their lives depend on it."

To learn more about Pellegrino's paddling trip, visit her blog at http://www.onearth.org/author/healthyoceanspaddle.