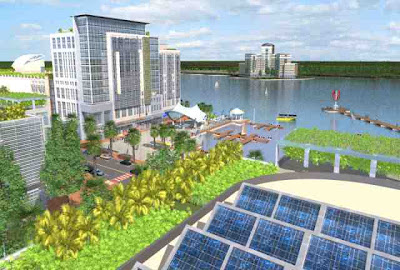 A former NFL football player-turned-developer has teamed up with Florida Power & Light to plan what the utility says will be the largest solar power array in the world.

Developer Syd Kitson and an FP&L official were joined by environmentalists in Washington to announce the plans to build in Southwest Florida a 75-megawatt solar array on 400 acres.

The solar array will be built at Babcock Ranch, where Kitson plans to build 19,500 homes and 6 million square feet of commercial space on 17,500 acres. Construction could begin by early 2010 with legislation allowing utilities to recover the cost of developing renewable energy and subsequent approval by the Florida Public Service Commission.

"I believe clean energy and sustainable development are the future of the American economy," Kitson, chairman and CEO of Kitson & Partners, said in a statement issued by his company. "Babcock Ranch will be a living laboratory for companies, workers and families ready to reap the rewards of innovation. No other place in America will be home to such a concentration of new jobs and technologies, energy-saving advances and global economic leadership."

FP&L already is building what will become the largest solar array in the world -- a 25-megawatt plant on 180 acres in DeSoto County. That will be large enough to provide power for 3,000 homes.

The largest photovoltaic solar system now in North America is the Nellis Solar Power Plant in Nevada, which produces 14 megawatts of electricity.

The Babcock Ranch project will cost between $350 million and $400 million, FP&L officials said. Three other solar projects now being built by FP&L will add 31 cents to the average monthly bill of the utility's 4.5 million customers. Construction on the Babcock Ranch project could start in early 2010 and be completed in about one year.

"We are extremely excited to build one of the world's largest solar photovoltaic projects once the state legislative and regulatory authorities have taken the actions that would be required for us to move forward," said Eric Silagy, chief development officer for Florida Power & Light.

U.S. Rep. Tom Rooney, R-Fla., praised the 20,000 jobs that are expected to be created at Babcock Ranch -- though only a few dozen will work at the solar plant -- and said the nation must start developing alternative forms of energy.

Representatives of the National Audubon Society, the World Wildlife Fund and the Sierra Club said the project will create the green jobs needed in the future to reduce greenhouse gas emissions and reverse climate change.

"We really have to innovate like this to solve some of our larger environmental issues across the country like air pollution and global warming," said Bob Perciasepe, COO of the National Audubon Society. "We are very happy this is moving ahead."
Posted by Bruce Ritchie at 4/09/2009 03:02:00 PM