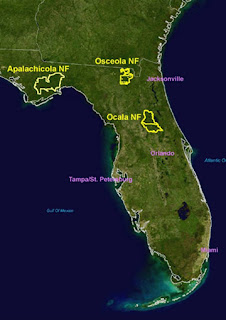 Florida's three national forests are offering free admission today through Sunday at recreation sites and campgrounds. The free admission is being offered to support "Get Outdoors Florida!", a coalition that says it wants to address societal needs including public well-being, health issues and natural resource conservation. Gov. Charlie Crist and the Cabinet endorsed the program with a resolution on March 24. The national forests in Florida are the Ocala National Forest near Ocala, the Osceola National Forest east of Lake City and the Apalachicola National Forest west of Tallahassee. 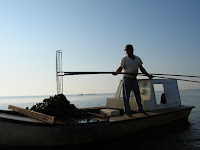 Apalachicola Bay remained closed to oyster harvesting on Friday after nearly 12 inches of rain was dumped during the past week on portions of the Florida Panhandle. Large amounts of fresh water increase bacteria levels in oysters, and the bay will remain closed until tests reveal the shellfish are again safe for consumption, said David Heil of the Florida Department of Agriculture and Consumer Services. Apalachicola Bay provides 90 percent of Florida's oysters and 10 percent of the nation's annual oyster harvest, according to the Florida Department of Environmental Protection. John Richards of the Franklin County Seafood Workers Association said his group is asking Franklin County and state officials to help the out-of-work oystermen while the bay is closed. 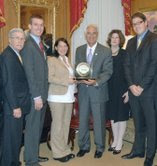 Gov. Charlie Crist was honored earlier this week by solar energy supporters who said he had fostered a strong solar market in Florida. Crist received the "Golden Meter" award from the Network for New Energy Choices, the Solar Alliance, the Vote Solar Initiative, the Interstate Renewable Energy Council and the Florida Solar Energy Industries Association. “Our residents and businesses have an immense opportunity to benefit from clean, reliable, in-state energy from the sun," Crist said in a statement issued by the groups. "I will continue working to unleash the solar opportunity in the Sunshine State.” A Senate committee earlier this week passed a bill requiring that utilities by 2020 produce at least 20 percent of the state's electricity from "clean energy," including nuclear energy. Crist in 2007 proposed a 20-percent requirement for "renewable energy" that did not include nuclear.

The Florida Wildlife Federation is hoping property insurance reform will help discourage growth in vulnerable areas. Rep. Bryan Nelson, R-Orlando, was expected to amend HB 1495 to reduce the state's exposure in its hurricane catastrophe fund by $12 billion over six years and to pay for hardening structures that are vulnerable to storms. Increasing coastal development has increased the financial risk to insurance companies and all Florida residents due to losses caused by hurricanes, said Jay Liles, Florida Wildlife Federation policy advocate. "We are looking for steps that can be taken to reduce the likelihood of more coastal development," he said.
Posted by Bruce Ritchie at 4/03/2009 10:23:00 AM