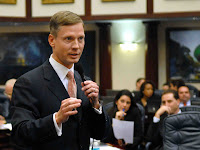 In a vote described by both sides in historic terms, the House today approved a bill that would allow oil drilling in state waters as close as three miles to the coastline.

Supporters said the bill was needed to reduce the nation's dependence on foreign oil. But opponents said drilling would put the state's beach tourism economy and commercial and recreational fishing at risk.

The 70-43 vote came after Rep. Dean Cannon, R-Winter Park and the designated House Speaker in 2010, said the bill would only begin the conversation on whether to allow drilling rather than granting any approvals.

The vote capped a dizzying week in which the proposal was amended to HB 1219 on its last committee stop last Tuesday. Previously the bill called on the Florida Department of Environmental Protection to study the process for allowing drilling while protecting Florida's coastal environment.

Gov. Charlie Crist said Friday he heard that House approval of his bill to require more renewable energy from utilities may be linked to the drilling bill. Rep. Adam Hasner, the House majority leader, said he wasn't aware of any such linkage.

This afternoon, Crist again said he would prefer that the issues be considered separately.

"I think each of these bills can stand on their own merit," Crist told reporters. "That would be my preference and my direction."

During the House debate Democrats generally lined up against the bill by Rep. Charles Van Zant, R-Keystone Heights, while Republicans backed it. Both sides describe the vote in historic terms.

Supporters said the bill would protect the environment by putting the governor and Cabinet in charge of deciding whether to issue oil and gas leases in Florida waters between three and 10 miles from the coastline.

They also said drilling would bring 16,000 new jobs, and reduce the nation's dependence on foreign oil and regimes that are hostile towards the U.S.

But opponents repeatedly noted that Van Zant's estimates of the economic benefits of drilling came from the oil industry itself. Democrats said a single oil spill would put some of the world's best beaches at risk and threaten the state's ocean economy, estimated in 2003 at $13.1 billion.

"If we gamble what we have that makes our economy work, we could see our economy crumble," said Rep. Richard L. Steinberg, D-Miami Beach.

After the vote, supporters and opponents outside of the House chamber said they are not sure of the fate of the bill in the Senate, where there wasn't a committee hearing on the drilling proposal.

"This is the Legislature increasingly looking like it's owned by the Texas oil companies and not accountable to its constituents," said Eric Draper, policy director of Audubon of Florida.

Opponents, he said, "will do the best we can to persuade 20 senators" to vote against it.

David Mica of the Florida Petroleum Council rejected the characterization by opponents that "big oil" controlled the vote.

"There was not one Texan who pushed one (voting) button today," Mica said.

He said he was optimistic about the bill in the Senate before the scheduled May 1 end of the legislative session. But added, "With the clock running, you don't want to disclose your vote counts."