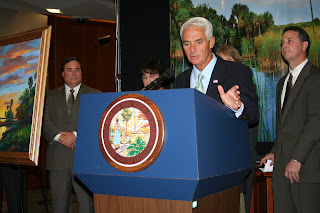 Crist last summer announced a preliminary deal by the South Florida Water Management District to buy up to 187,000 acres for $1.34 billion.

Facing criticism from some legislators and declining state revenues, Crist said the state now will buy 72,500 acres for $533 million. The state would still have an option for the next 10 years to buy an additional 107,000 acres.

"Nothing worthwhile in life is easy," Crist said. "This has certainly not been easy. But it is worthwhile."

The South Florida Water Management District, which approved the first deal in January, will discuss the new proposed deal at workshops next week, said Carol Ann Wehle, the district's executive director. She also said she will appear before a Senate committee on Monday to discuss the deal.

Environmental groups praised the revised deal, saying Florida shouldn't led the sagging economy sidetrack the state's conservation goals. After having received $300 million since 2000, the state's land-buying program would get nothing in the proposed House and Senate versions of the fiscal 2009-10 state budget.

Some local elected officials and business leaders in Clewiston have criticized the proposed deal. The loss of the U.S. Sugar Corp. mill and citrus processing refinery could cost 10,700 jobs statewide, according to a University of Florida study.

Those critics were not immediately available for comment. Asked by a reporter whether the new proposal would quiet the critics, Crist said, "There are always going to be critics. We don't want them quieted. That's now how we are in America."
Posted by Bruce Ritchie at 4/01/2009 01:41:00 PM