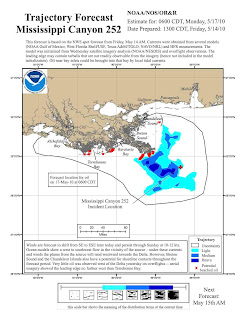 Five tar balls have been found on Perdido Key in Escambia County, representing possibly the first oil from the massive ongoing spill to reach Florida waters, the U. S. Coast Guard reported on Friday.

The five tar balls, each about a half-inch in diameter, were collected Thursday over a 3.5 mile stretch of shoreline, said Dawn Patience, a spokeswoman for the Joint Information Center in Mobile, Ala. She said she had no other information about the tar balls or whether they were being tested to determine whether they came from the Deepwater Horizon oil spill off the Louisiana coast.

The outer edge of the spill site appeared to be about 40 miles from Florida's western tip at Perdido Key, according to a NOAA trajectory map. Ocean models showed a west to southwest flow of oil away from Florida.

At the spill site Friday, BP was continuing to work on a pair of options to try to stop the ongoing oil leak. BP was attempting to insert a pipe into the well to funnel the oil to ships at the surface. If that didn't work, there would be second attempt to use a containment device capture oil from the leaking well in water 5,000 feet deep.

The New York Times and National Public Radio reported that the spill could be 10 times larger than the 210,000 gallons per day as stated by the Coast Guard. The response to the spill does not depend on the estimates, Rear Admiral Mary Landry of the Coast Guard told reporters on Friday. A Florida Department of Environmental Protection spokeswoman referred questions to the Coast Guard and BP unified command.

Other Florida officials on Friday were continuing to assure the nation that Florida beaches were free of oil and that its seafood is safe to eat. The National Oceanic and Atmospheric Administration will provide the state with additional funding to increase monitoring of fishing to possibly extend the red snapper fishing season, which starts June 1 and ends June 24. Sen. Don Gaetz, R-Niceville, has called on the federal government to open snapper season early in response to the spill.

The Florida Fish and Wildlife Conservation Commission is holding an emergency meeting May 19 in St. Pete Beach to receive information about the oil spill response. Some charter boat captains in Panama City were raising concerns that boats and workers from out of state rather than locals were being used by BP in response to prepare for the spill, Capt. Bob Zales told state wildlife officials during a conference call. "There should be some effort to bring local folks into this operation," Zales said. He is president of Panama City Boatman Association and the National Association of Charter Boat Operators.