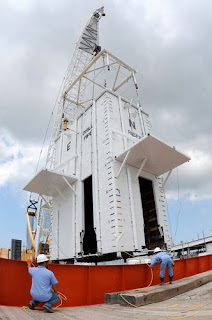 A combination of mild weather and a favorable current could keep the Deepwater Horizon oil spill from reaching the state's beaches for at least three to five days, state officials said on Wednesday.

Godsey explained that winds right now are blowing out of the north and aren't expected to change until the end of the week. She said there is a slight current that could push the massive oil spill toward Louisiana marshes.

But state officials also pointed out that the loop current - which could carry the spill down around the southern tip of Florida - also remains 200-250 miles away as well.

David Halstead, the state's emergency management director, even said that state officials could be still waiting for the spill to finally come ashore early next week.

The U. S. Coast Guard on Wednesday opened an incident command center in St. Petersburg and has begun monitoring the spill from a Coast Guard facility in Key West, according to the Florida Department of Environmental Protection.

Meanwhile, BP was moving ahead with plans to deploy a building-size containment vessel over the gushing oil well over the weekend and it could stop the leak by Monday, said Doug Suttles, BP's chief operating officer. A ship carrying the containment structure was sailing towards the site and should reach it later Wednesday.

The calm weather Wednesday allowed BP to set fires to burn off some oil from the sea surface, said Charlie Henry, a National Oceanic and Atmospheric Administration scientist.

Suttles said there was no confirmed oil onshore. He said the company is tracking only two oil sheens along islands along the coast of Louisiana.

Regarding the containment structure, Suttles and Coast Guard Rear Admiral Mary Landry, the incident commander, cautioned against having high hopes for the technology, which has never been used in waters nearly a mile deep.

"This hasn't been done before," Suttles said. "It is very complex. It will likely have challenges along the way."

The company also suspended the use of oil dispersant chemicals at the broken well near the sea floor as part of a planned review, Suttles said. Some marine scientists have raised concerns about the chemicals harming larval sea life.

Landry declined to estimate the size of the spill because she said it is "dynamic every day."
(Story content provided by the Current, produced by The Florida Tribune. Story copyrighted by Bruce Ritchie and FloridaEnvironments.com. Do not copy or redistribute without permission.)
Posted by Bruce Ritchie at 5/06/2010 08:29:00 AM