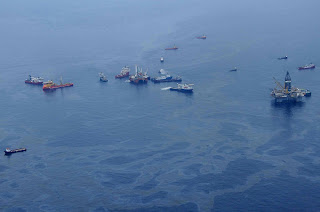 A BP official said Thursday that it was too soon to know whether the "top kill" operation aimed at ending the gush of oil from the damaged oil well off the Louisiana coast was working.

BP was planning to pump more drilling "mud" into the gushing well Thursday night in an attempt to stop the flow, said Doug Suttles, BP's chief operating officer. "Until we've completed the job and the well is no longer flowing, it's difficult to be optimistic or pessimistic," he said.

Forecasters said Thursday the spill that begin April 20 still was not a threat to the Florida coast within 72 hours. In Escambia County, test results were still not available to determiner whether 100 tar balls that were found Wednesday along a beach were from the Deepwater Horizon oil spill.

On Thursday, the U. S. Geological Survey reported that the well was gushing more than twice the amount previously estimated, making the spill larger than the Exxon Valdez. A science team estimated the flow rate at between 500,000 to 800,000 gallons per day, more than double the previous estimate by BP and the Coast Guard.

President Barack Obama announced Thursday he is extending a moratorium on drilling deep water wells for six months in depths of more than 500 feet. "It is my job to make sure that everything is being done to shut this down," Obama said at a White House news conference.

Attorney General Bill McCollum, a Republican candidate for governor, said the president's news conference reinforced Floridians' views that the federal government is not doing everything it can to prevent further damage. "The administration has been derelict in removing administrative barriers to help the Gulf states prevent the catastrophe from reaching our shores and is now appearing to take credit for the top kill solution -- a standard industry practice -- to bolster its lack of engagement and lackluster response," McCollum said.

CFO Alex Sink, a Democratic candidate for governor, asked Gov. Charlie Crist to activate an emergency loan program to help businesses and to send a Florida Department of Environmental Protection crew to Louisiana to observe the response. A DEP spokeswoman said the department is reviewing the request.