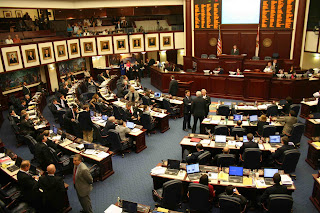 A bill that provides a path for the state towards reaching a 75-percent recycling goal by 2020 was adopted by the Legislature Friday and is being sent to the governor. Florida now recycles about 28 percent of its waste, according to the Florida Department of Environmental Protection.

The Legislature in 2008 adopted the 75-percent recycling goal to reduce energy use, create jobs and save landfill space. HB 7243 directs schools and state agencies to report on their recycling efforts, directs DEP and Enterprise Florida Inc. to establish a state recycling business assistance center, requires recycling in apartment complexes in certain counties and requires DEP to issue reports if the state fails to meet benchmarks, including 40 percent recycling by Dec. 31, 2012.

The original House bill, HB 1559, appeared to be on life support in early April because of opposition from some waste management operations. The bill received support from diverse groups including the Florida Retail Federation, Associated Industries of Florida and Sierra Club Florida. "It will definitely get Florida thinking about recycling and push us in the right direction," said Keyna Cory, senior lobbyist for Associated Industries of Florida. "Recycling has been on the back burner too long."

Sierra Club lobbyist David Cullen said the group supports HB 7243 but remains concerned that it encourages garbage-burning. Sierra Club also is concerned about bill amendments approved in the final days of the legislative session, he said.

Another bill going to the governor, HB 569, would lift the ban on putting yard trimmings in landfills if they burn landfill gas to produce electricity.

The North American Solid Wastes Association and Waste Management Inc. supported the bill, arguing that it would allow renewable energy to be produced and would save on having to use separate trucks to haul garbage and yard trimmings.

But the U.S. Environmental Protection Agency says yard trimmings can be used to create beneficial compost rather than taking up landfill space. Sierra Club Florida, the U. S. Composting Council and the Southern Alliance for Clean Energy were among the groups opposing the bill last week.