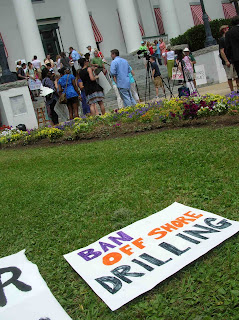 Chief Financial Officer Alex Sink on Monday asked President Barack Obama to direct the federal government to take away control by BP over the response to the ongoing oil spill in the Gulf of Mexico. Sink also asked the president to send top administration officials to brief the state Cabinet at its meeting on Tuesday.

In her letter to the president, Sink wrote, "For too long we have relied on BP and its contractors to staunch the flow of oil and they have failed at every turn. We are now more than a month out from this disaster, and Floridians want to know: Where is the federal government's leadership?"

Interior Secretary Ken Salazar said Monday, "We are not standing on the sidelines and letting BP do what BP wants to do. The federal government has mounted the largest response to fight this oil in all of the history of this country."

Gov. Charlie Crist, who talked to President Obama with other Gulf Coast governors on Monday, also said that he is "moving in that direction." "The sense of urgency our fellow Floridians feel is clear and present."

BP Chief of Operations Doug Suttles told reporters on a conference call Monday that the company has the most experience in the world with deep-water drilling and is bringing in experts from other companies and academia to help stop the spill. "I don't know of anything else we could do," Suttles said. "But if the government felt there were other things we could do, it is clearly in their power to do that."

Also Monday, about 60 protesters gathered on the steps of the historic capitol to protest against drilling as an audience of about 30 people watched. Organizers called on Crist and the Legislature to hold a special session to ban drilling and provide more money for renewable energy.

"Our beaches are the bread and butter of Florida," Kim Ross of Tallahassee, a protest organizer told the audience. "Now they are under threat. We didn't make that threat. We didn't ask for it. But now we are stuck with it." Rep. Michelle Rehwinkel Vasilinda, D-Tallahassee, and her primary opponent, Rick Minor, stood with the protestors on the steps.

Over the weekend, President Obama announced that he was naming former Florida Democratic senator and Gov. Bob Graham to co-chair a bipartisan commission that will make recommendations within six months on avoiding future spills.

(Story provided by The Florida Tribune. Story and photo copyrighted by Bruce Ritchie and FloridaEnvironments.com. Do not copy or redistribute without permission, which can be obtained by contacting brucebritchie@gmail.com.)
Posted by Bruce Ritchie at 5/25/2010 08:07:00 AM