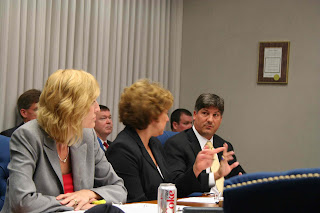 Public Service Commission members wrestled Tuesday over draft proposed administrative procedures that are aimed at preventing commissioners from unduly pressuring agency staff. Bills to reform the PSC failed to pass the Legislature during the session that ended April 30.

A proposed House committee bill, HB 7209, would have removed the regulatory staff from the agency and required commissioners and the remaining staff to perform their duties without "undue influence" from anyone. PSC Commissioner Lisa Polak Edgar earlier this month sent a letter to PSC Executive Director Tim Devlin asking him to review how to protect commission staff "from undue pressure, influence and worry."

The draft proposed procedures would prohibit commissioners from demanding staff, other than commissioners' aides, from taking a position or pursuing a particular course of action. Violations would be referred by the agency executive director, inspector general and general counsel to the Florida Commission on Ethics.

PSC Chairwoman Nancy Argenziano told Edgar that if she has examples of commissioners pressuring staff, "I'd like you to start and maybe name them. Because if you are going to cast aspersions, I want my name cleared." Edgar said she was seeking to clarify what boundaries should exist between commissioners and staff. "So discussions of examples and aspersions or insinuations, I want to be very clear, is not at all what I was asking for or doing or what I want to engage in," Edgar said.

Argenziano and Commissioner Nathan A. Skop said they had concerns that the rules could prevent commissioners in the future from asking questions or operating independently. And Skop said House members told him that they had heard about undue pressure a "culture of fear." Skop said, "I don't think anybody wants to cast aspersions but aspersions are being cast on this issue."

No action was taken. The draft procedures along with a draft code of conduct to define prohibited "ex parte" communications will be considered again at a future commission meeting.

(Story provided by The Florida Tribune. Story and photo copyrighted by Bruce Ritchie and FloridaEnvironments.com. Do not copy or redistribute without permission, which can be obtained by contacting brucebritchie@gmail.com.)
Posted by Bruce Ritchie at 5/19/2010 08:18:00 AM