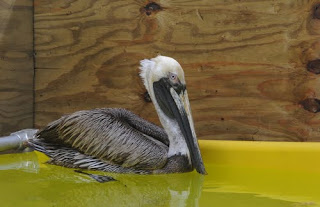 A pelican swims on May 13 in a make-shift pool after being cleaned of oil at the Clean Gulf Associates Mobile Wildlife Rehabilitation Station on Fort Jackson in Plaquemine, La..

The oil spill in the Gulf of Mexico appears to be taking a toll on wildlife but the effects of the disaster could linger for years, federal wildlife officials said Tuesday.

The National Oceanic and Atmospheric Administration said 162 stranded sea turtles have been recovered from Louisiana through the Florida Panhandle since April 30. That's significantly higher than in the past, though there has been no confirmation yet that they were killed by the oil, said Steve Murawski of the NOAA Fisheries Service.

In addition, 12 dolphins have been found dead along with 23 seabirds. Twelve birds have been treated for oil and four have been released into the wild.

But more are risk, said Roger Helm, chief of the Division of Environmental Quality at the U.S. Fish and Wildlife Service. "If this stuff comes on shore, a lot of birds are going to die," he said.

Fish and wildlife experts are concerned that nesting loggerhead, Kemp's ridley and leatherback sea turtles will be affected as they move through the area. Other creatures that could be affected include sea turtles and other creatures living in floating sargassum algal communities along with deep sea corals and floating fish larvae and eggs.

"This spill is significant," said Rowan W. Gould, acting director of the U. S. Fish and Wildlife Service. "In all likelihood it will affect fish and wildlife resources in the Gulf and maybe across the North American continent for years if not for decades."