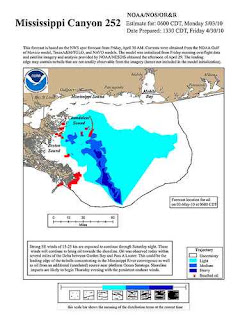 Forecasted movement of oil spill shows it not reaching Florida through Monday. To view the image source, click here.

Gov. Charlie Crist issued an emergency declaration Friday stating that the oil spill in the Gulf of Mexico poses a major disaster threat to the Florida Panhandle.

The explosion and sinking of the Deepwater Horizon oil well off the Louisiana coast last week is causing 200,000 gallons of oil to leak daily into Gulf waters. The spill was more than 80 miles from Florida on Thursday, according to the Florida Department of Environmental Protection. "The oil slick is generally moving in a northerly direction and threatens Florida's coast," Crist wrote Friday in his executive order. "Oil continues to spill from the well as all efforts to stop the discharge have failed and may not succeed for an extended period of time."

Crist was scheduled to hold a telephone conference call Friday with federal Cabinet officials to discuss the situation. A federal agency forecast map released Thursday suggested that the spill could arrive on Florida's shores in the Pensacola area on Monday.

Crist's order calls for activating the Florida National guard and tells the director of the Division of Emergency Management to activate a state emergency plan in coordination with the Florida Department of Environmental Protection. On Thursday a BP representative said the company was continuing its attempts to cap the well leaks and was preparing to drill another well to intercept the leak, which could take three months.

On Friday, Sen. Durell Peaden Jr., R-Crestview, asked fellow senators to "pray for our counties to make sure we don't have any destruction of our estuaries." Crist's order was issued for Escambia, Santa Rosa, Okaloosa, Walton, Bay and Gulf counties.