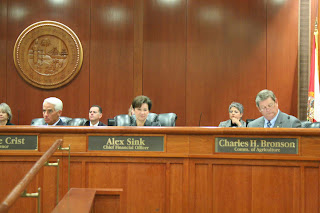 A proposed wood-burning power plant in Gainesville that would be tied for being the largest of its kind in the nation was approved Tuesday by the governor and Cabinet.

In their last meeting before leaving office, the four elected Cabinet members voted unanimously to approve a power plant construction and operating certificate as recommended by an administrative law judge. American Renewables still must receive a state air pollution permit, and the Florida Department of Environmental Protection is awaiting a recommendation from Administrative Law Judge Robert E. Meale on a permit challenge.

Gov. Charlie Crist, Agriculture Commissioner Charles H. Bronson and Chief Financial Officer Alex Sink have pointed to such woody biomass plants as an important source of renewable energy in Florida's future. But some proposed projects around the state have been delayed or scrapped because of local opposition.

"I think this can be a great breakthrough," Crist said of the project, adding that he had "great trust and great confidence" in the groups that supported it.

Gainesville officials said the project will produce jobs and renewable energy using waste wood and will reduce the city's reliance on coal burning. Project supporters include the Florida Wildlife Federation, the Florida Forestry Association and the Southern Alliance for Clean Energy.

"The project has something of value for everybody," Gainesville Mayor Pro Tem Jeanna Mastrodicasa said. At 100 megawatts, the project would produce enough power for 70,000 homes. It would be tied with a plant under construction in Texas for being the largest woody biomass plant in the nation, according to American Renewables Inc.

An attorney for former Mayor Thomas Bussing, who filed a legal challenge against the siting permit application, said it was premature under state law for the Cabinet to vote because the air permit had not been issued. Opponents argued that the plant will contribute to pollution and global climate change and puts Gainesville utility customers at risk of rate increases to pay for the project.

"I would like to say this is not green energy," Alachua County resident Maria Minno said. "Biomass incineration has unacceptable health risks."

Thanks for reporting on this, Mr Ritchie.

Regarding the health risks that Maria Minno finds unacceptable, I wonder if she has evaluated biomass emissions next to emissions coming from old coal fired power plants? Here is such a comparison, from North Carolina:
http://bit.ly/Coal_v_Wood
New wood-fueled biopower is clearly less polluting than existing coal-fired power plants.

Regarding the misleading argument that GREC will contribute to climate change, I wonder if opponents have seen this quote by Dr James Hansen?

"Well-planned sustainable biomass power plants are a viable source of clean renewable electricity, and thus are helpful for the task of phasing out coal-fired power plants.

Knee-jerk opposition to all biomass projects has no sound scientific basis and is harmful to attempts to stabilize climate for the sake of our children, grandchildren, and future generations.  In my opinion, the proposed waste and residue-powered 100 MW Gainesville Renewable Energy Center deserves support and is a useful step toward the essential task of phasing out coal emissions."

Not only is he a brilliant and accomplished scientist, he's also been arrested protesting coal, so I think his credentials are unimpeachable on this question.

Mr Ritchie I would like to point out that a great deal was omitted in your reference to Dr James Hansen "a Columbia University Climatologist" that supports Gainesvilles Biomass plant.
A professor indeed.
But what could Dr Hansen possibly know compared to Bussing or Maria?

Dr James Hansen is the Director of the NASA Goddard Institute of Space Studies for 20+ years - however most knowledgeable environmentalists regard him as the Father of Global Warming and Climate Change, the very Scientist that more or less "discovered Global Warming for the world" and is charged by NASA to continue all research and developments regarding all aspects of Climate Change. He has also won science awards worldwide for his superior science papers.

Emissions are specialty of his. He can actually read BIOMASS emissions data.

I am bothered that he receives such a slight in this column, but Maria M is prominently quoted as saying "this is not green..."
and Tom Bussing in routinely fawned over with his extremely challenged ability to tell the truth about anything, (including his educational qualifications)

But what could Dr Hansen possibly contribute to actually addressing Climate Change with Renewable, Clean Energy - compared to such exciting quotes from Gainesville obstructionist, publicity hounds??

The recommended order from Judge Meale was released the same day shortly after the Cabinet's vote, it recommends that FDEP issue the air permit which will likely happen before the end of the year. That only leaves a challenge to the PSC needs determination currently pending before the Florida Supreme Court filed by Dian Deevey who in 2005 authored a report for the Alachua County Environmental Protection Committee reviewing the proposal at that time from GRU to build a 220 MW coal plant. In chapter 8 she recommended that GRU institute more conservation measures, they have since doubled the amount of energy saved over what a consultant said was practicable, and she recommended that GRU build a 100 MW biomass power plant. So GRU actually does these things and she says it is a disaster and will bankrupt the utility and the city. This despite the fact that it will at worst raise residents bills a few dollars a month (on an average $100+ monthly bill) and three bond rating agencies gave GRU a aa bond rating and one specifically cited the proposed biomass plant as a reason for upgrading the outlook on the utilities bonds. Questions need to be asked of opponents to show some factual and empirical evidence for their claims.
GRU has also instituted the first solar feed in tariff in the nation and currently has more solar PV on its system per capita than any other city in Florida. It is the only city in Florida and one of a few in the nation that will meet the Kyoto Protocol's call for a 7% reduction in ghg emissions below 1990 emission levels and will generate over 20% of its electricity from renewable resources when the biomass project goes on line.
A comparison between the emissions per MWhr generated between the coal plant at GRU, which was recently upgraded to meet the latest federal standards, shows the biomass plant will emit 42% less particulates/MWhr, only 10% as much NOX and less than 1/30th the SO2 per unit energy. As to CO2 emissions it is fossil carbon sources that increase the concentration in the atmosphere because they come from geologic sinks formed millions of years ago, biomass only recycles the carbon in the biosphere which will return to the atmosphere no matter whether it is burned in the field or left to rot, in which case some would be emitted as methane (CH4) a 20+ times more potent ghg.
On the matter of dioxin emissions the biomass plant will emit 0.11 grams dioxin equivalents per year, burning half of the fuel in the field would emit 9 grams of dioxin equivalents. Similarly much more of all of the above detailed pollutants will be emitted in the region if the plant is not built and the current silviultural practices continue which according to the Florida Division of Forestry results in 60% of the logging wastes being burned in the field. All of this information is in the public record of the permitting process yet the opponents are never asked for a response to these facts. Instead every news source simply offers a sound bite quote from each side with no analysis of the facts or lack thereof behind their statements.