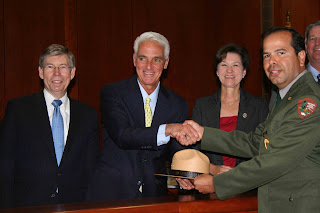 In their final meeting before all four members leave office, Gov. Charlie Crist and the Cabinet voted Tuesday to approve the transfer of 29,412 acres of state land to the federal government as an addition to Big Cypress National Preserve.

Crist, Chief Financial Officer Alex Sink and Attorney General Bill McCollum are leaving office in January after unsuccessful bids for other offices. Agriculture Commissioner Charles H. Bronson is leaving office because of term limits. The next Cabinet meeting will be Jan. 18.

The Cabinet in September delayed action on the Big Cypress land transfer until after the National Park Service issued a proposed management plan for the property, which it did in November. Bronson raised concerns that a federal designation of the former state land as "wilderness" could restrict hunting, use of recreational vehicles and mechanical control of wildfires.

Big Cypress Preserve Superintendent Pedro Ramos said the National Park Service will work with the state before asking Congress to designate some of the addition as wilderness.

"Trust me, we will make sure that appropriate land makes it onto that proposal" for Congress to consider, Ramos said. And he said the management plan can be adjusted in the future by following processes established under federal law. 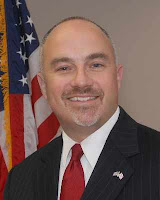 Rep. Matt Hudson, R-Naples, said neighboring ranch owners are concerned about wildfire spreading from the preserve. And he said off-road vehicle use, including "swamp buggy" races, are "important to who we are" in Collier County and that more vehicle trails are needed.

"I would ask you do not take away our last chip in the game [the state land transfer] until we have these issues truly resolved," Hudson said.

Environmental groups urged the Cabinet to approve the deal, which includes $4 million for the state to buy other land. Former Gov. Reubin Askew and Hobe Sound environmentalist Nathaniel Reed sent letters in support of the deal.

Bronson and McCollum said Ramos' assurances that he will work with the state swayed them to support the deal, which was approved 4-0.

"I will vote today to support the motion though I still have some hesitancy knowing things can change overnight," Bronson said.

The December 3 Capitol Reports edition from Florida Public Radio had an interview with Barney Bishop in which he proposed meeting with Charles Patterson of 1,000 Friends and Eric Draper of Audubon during the next legislative session to discuss which Florida Forever properties could be sold to cover the State budget deficit. I hope you will investigate this proposal further and report back on it. Doesn't look good for saving additional land.