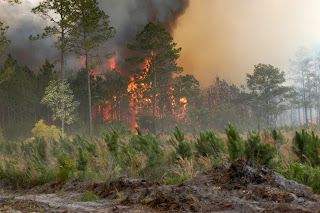 Wildfire season typically peaks in January and extends until June, though fires can break out any time because of dry conditions. The dire forecast should cause state and federal parks and other land-management agencies to take notice along with local fire departments and rural landowners.

This year wildfires have burned nearly 39,000 acres, according to the Division of Forestry. A single wildfire in 2007 burned 600,000 acres in North Florida and South Georgia and forced evacuations in Columbia County.

A lack of any major tropical storms this year has contributed to dry conditions along with a La Niña weather pattern, which is expected to continue until at least early next year. La Niña is the name given to a weather pattern that is caused by unusually cold water temperatures in the eastern Pacific Ocean.

"This weather cycle calls for a warmer and drier winter here in Florida," Bronson said in a statement. "And when you combine that with the lack of any real rainfall associated with tropical systems so far this season, we have to expect a tough wildfire season ahead."

He said homeowners can protect themselves and their property by cleaning roofs and gutters to eliminate flammable debris, keeping areas directly next to their homes free of flammable materials and making sure their landscaping within 30 feet is sufficiently watered to deter flames. For more information, go to the Division of Forestry website.

(Photo by Mark Wolfe/FEMA via Wikipedia Commons. Story provided by the Florida Tribune. Story copyrighted by Bruce Ritchie and FloridaEnvironments.com. Do not copy or redistribute without permission, which can be obtained by contacting brucebritchie@gmail.com.)
Posted by Bruce Ritchie at 10/09/2010 09:54:00 AM