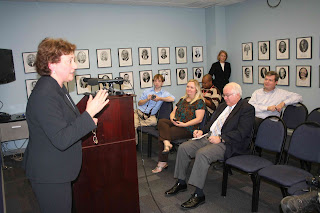 Nancy Argenziano announced Tuesday she is resigning from the Florida Public Service Commission to support Democrat Alex Sink in her race against Republican Rick Scott for governor.

Argenziano -- who was elected as a Republican state senator -- told reporters she is resigning to speak out against what she considers to be a "catastrophe" facing the state if Scott is elected. State law prohibits commissioners from endorsing or supporting political candidates and causes, she said.

If Scott is elected, Argenziano said there would be no balance of power or check on the Republican-led Legislature. And she said Scott was scheming to raise electric rates on residential customers effectively by seeking to lower commercial rates and increase utilities' earnings.

"I do not know that I can effectively portray the immensity of the danger of a marriage between the clowns, cowboys and crooks of the current Republican-led state Legislature and Rick "the Fifth Amendment" Scott," she told reporters, reading from a prepared statement.

Argenziano was scheduled to leave office in January because she was passed over for re-appointment by the PSC Nominating Council in June. But she said her speaking out is not because of "sour grapes," rather she is angry at the corruption that she sees with the influence of utilities over the Legislature and the PSC.

Scott campaign spokesman Joe Kildea responded to Argenziano's endorsement by saying, "It's amazing that anyone would publicly support CFO Sink as reports are simultaneously emerging about her authorizing felons to work in the insurance field and access the sensitive and personal information of Floridians."

The Sink campaign issued a statement saying, "Alex Sink is proud to receive the endorsement of a proven consumer champion with a record of standing up for Floridians." Sink herself told reporters that the authorizing of people to work in insurance was required by state law.

A spokesman for the Republican Party of Florida had no immediate comment nor did a spokesman for Atwater. Haridopolos declined to comment through a spokesman in the Senate president's office.

Argenziano pointed out that she was giving up three months of her $130,036 annual salary to speak out against Scott and the Legislature. She said she will return to her home in Citrus County but added that she has no employment plans.

A spokesman for Crist said the PSC Nominating Council would have to recommend a replacement for the remainder of Argenziano's term. Julie I. Brown, an associate legal counsel for the First American Corp., was named by Crist last month to fill Argenziano's seat in January when her term was set to expire.

(Story provided by the Florida Tribune. Story and photo copyrighted by Bruce Ritchie and FloridaEnvironments.com. Do not copy or redistribute without permission, which can be obtained by contacting brucebritchie@gmail.com.)
Posted by Bruce Ritchie at 10/12/2010 08:24:00 PM