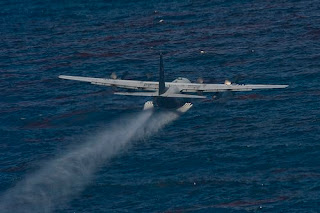 The use of chemical dispersants against the oil spill was a benefit to Florida with no drawbacks, Department of Environmental Protection Secretary Michael Sole told a House work group on Wednesday.

House Speaker Larry Cretul appointed work groups last month to recommend possible legislation in response to the Deepwater Horizon oil spill off the Louisiana coast. Sole spoke Monday on a conference call with the group that is dealing with preparation for future disasters and is chaired by Rep. Trudi Williams, R-Fort Myers.

BP used nearly 2 million gallons of dispersants to help break up the oil spill since April 20 but none was sprayed off Florida, according to DEP. U.S. Rep. Edward Markey, D-Mass., said BP "often carpet-bombed the ocean with these chemicals" but the U.S. Environmental Protection Agency says they were less toxic than the oil itself.

On the Wednesday conference call, Sole was asked by House members to discuss lessons learned from the federal and state response to the oil spill and he covered several topics. He said the use of dispersants helped prevent more oil from reaching Panhandle beaches from the spill site 120 miles away.

"We really didn't get any of the adverse impacts of dispersants," he said. "We just got all of the benefit."

Sole also credited Florida with not erecting barriers to protect the coast from oil. "There were a lot of really bad ideas implemented in other states just because of the fear," he said. "I hate to say it harshly, but it's true."

He was critical of the federal government for closing as much as one-third of the Gulf to fishing at one time and said areas were closed where there was no oil found, affecting the seafood industry in Florida. While he said the intent was to protect the reputation of Gulf seafood, he added that people nationwide are afraid now of eating it anyway. Williams chimed in, "It seems when they (federal officials) can use a fly swatter, they use a bomb. They are so far over-reaching in everything they do."

Sole also said the state should have pushed earlier for the Coast Guard and BP to open a Florida command office rather than relying the Mobile, Ala. district office to coordinate the oil spill response. And he said the federal government should have oil-skimming boats and protective boom in place in the state to deal with future oil spills even if Florida maintains its ban against drilling in state waters, which extend only 10.3 miles from shore.

"Why should the state of Florida take on that obligation?" he said.

Good Riddance, he can't quit soon enough. How can he say that dispersants were a benefit when there is no way the scientific evidence can be analyzed yet on this matter?
Maybe now that he is gone we can get someone in office that will not fight with National Water Pollution standards.

Okay, so BP sprayed about 100 million gallons of dispersant on the oil. Let's be conservative and say that this was sprayed on an area that's 50 square miles. If that water is a mile deep, how many trillion gallons is diluting that dispersant?

I seem to recall all the environmental groups screaming and yelling about the acidic water that was barged from Piney Point and dispersed into the gulf. Low and behold, immediately after it was sprayed into the gulf it was undetectable. Not a single environmental impact could be tied to it.

Regarding the quantity of dispersants, the Joint Unified Command says:

"Approximately 1.84 million gallons of total dispersant have been applied—1.07 million on the surface and 771,000 sub-sea. Approximately 577,000 gallons are available."