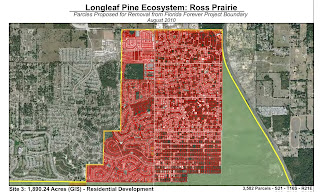 A state panel on Friday will consider removing 7,577 acres from the state conservation lands purchase list because the land has been developed or otherwise is no longer considered desirable.

The Florida Forever conservation land-buying program is the largest in the nation but its funding has been sharply cut the last two years.

Some Republican and Democratic members of the House Natural Resources Appropriations Committee earlier this year criticized the state for buying conservation land that the members said wasn't needed. But the Florida Department of Environmental Protection says it routinely examines proposed projects to determine if all the land on the list still is needed.

Since June 2009, DEP has identified 28,886 acres for removal from the state purchase list, Jennifer Stan Diaz, a DEP spokeswoman, said in an e-mail. Richard Hilsenbeck, director of conservation projects at The Nature Conservancy, said the reductions were OK.

On Friday, the state Acquisition and Restoration Council will vote on removing 3,612 acres at Deland Ridge in Volusia County and Ross Prairie in Marion County. They are part of Longleaf Pine Ecosystem project, which would still would have half of the 23,188 acres remaining left to be purchased.

In Alachua and Levy counties, DEP identified 3,125 acres around Watermelon Pond that have been developed and should be removed from the purchase list. About half of the 12,083-acre purchase area has been acquired by the state. ARC also will consider reductions totaling 981 acres at three other purchase projects around the state.

The council also will receive public testimony on proposed new projects: A 54,126-acre conservation easement in Dixie County along the lower Suwannee River and the Gulf of Mexico, a 16,510-acre conservation easement at Horse Creek Ranch in Desoto and Hardee counties, and 3,272 acres in St. Johns County near Interstate 95 and State Road 206. The meeting will be held at DEP's Marjory Stoneman Douglas Building, 3900 Commonwealth Boulevard.