A supporter of the "Florida Hometown Democracy" amendment is expressing surprise at state CFO Alex Sink's opposition to the measure.

Amendment 4, which is on the ballot in November, would require voter approval of changes to local comprehensive growth plans. Supporters say the measure will help rein in growth and reduce developers' influence over local land-use decisions. 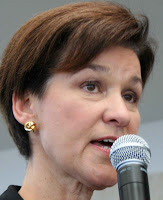 But Sink, in remarks to journalists on Wednesday, sided with opponents who predict it will halt economic growth in Florida. "It's a horrible idea," she said.

"You are kidding me," Ross Stafford Burnaman, co-founder of the Florida Hometown Democracy Inc. PAC, replied to a reporter.

"I'm surprised," he added. "I thought she had her hands full with the governor's race."

Earlier this week, opponents released an economic consultant's report that estimated between 106,652 jobs and 267,247 jobs would be lost if the amendment passes.

Sink just made her largest strategic mistake. Any developer in this no growth economy is living off of buyers from other Florida properties. This decreases our property values by adding to the already excessive housing and commercial property stock. Many Floridians want this unsustainable trend to stop and support Hometown Democracy. Crist made his best choice, Florida Forever and Energy.

Why is Ross surprised? No one in the political establishment supports Amendment 4.

Sink just lost 100,000+ votes -- the voters who signed the HFD petitions. She gained about 10,000 votes -- the developers and their allies she's pandering to. That's a net loss of more than 90,000 votes. Democratic leaders should show her the math.