Gov. candidates cold toward drilling -- but not Crist, Rubio 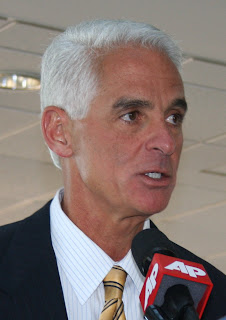 Gov. Charlie Crist speaks to journalists at the Capitol

The three major candidates for governor today largely rejected the idea of allowing drilling off Florida's Gulf coast during remarks at the 2010 Associated Press Legislative Planning Session at the Capitol.

Attorney General Bill McCollum, running as a Republican, said an oil spill like the one that occurred last year off Australia would "completely terrorize our beaches."

"You've got to show me" that new technology will prevent a spill, McCollum said. "I'm not completely and unalterably opposed to it. But I'm not ready to jump in and be for it right now based on what I know.

Sen. Paula Dockery, McCollum's opponent for governor in the Republican primary, said she has concerns about oil spills, about how military training activities in the Gulf of Mexico would be affected by drilling and how "bad guys" would be prevented from acquiring leases.

"I'm concerned about a complete lifting of the ban (on drilling)," she said. "The devil is in the details."

State CFO Alex Sink, running for governor as a Democrat, said the House last year supported "near-beach drilling" within three miles of the coast. But she said her biggest concern is the secrecy of oil drilling supporters behind Florida Energy Associates, the firm that is lobbying to open Florida waters to drilling.

"I learned in business the first rule of business and doing deals is know who you are dealing with," she said. "There is some secret somebody out there who is promoting this notion."

"It must be -- in my view -- far enough (from the coast), clean enough and safe enough before I would support it," Crist said.

Rubio said he is in favor of exploration, but he added that no one wants to harm the environment. 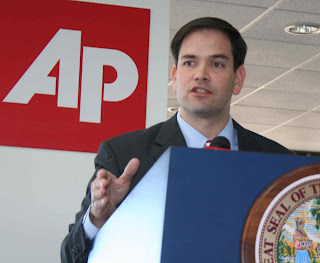 "With that said, I'm a believer that the technology today is advanced enough to be able to explore for our domestic sources of energy without being damaging to our environment," he said.