EPA to step up NO2 monitoring in Florida 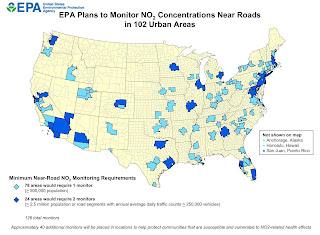 Only Cook County, Illinois is now projected to be in violation of the new hourly standard of 100 parts per billion. But the EPA will step up monitoring near cities and along major urban roadways in areas including Jacksonville, Titusville-Melbourne, the I-4 corridor from Orlando to Tampa, Bradenton-Sarasota, Fort Myers and the south Florida counties of Miami-Dade, Broward and Palm Beach.

Nitrogen dioxide is formed from vehicle, power plant and other industrial emissions and contributes to the formation of fine particle pollution and smog.

A Florida Department of Environmental Protection spokeswoman said it's unknown whether any roadside areas will violate the new standards.

The new monitors will begin operating by Jan. 1, 2013. EPA intends to re-designate non-attainment areas after three years of data collection.

Frank O'Donnell, president of the Clean Air Watch environmental group in Washington, D.C., said the effect now of the announcement is minimal but that could change in the future.

"The idea is to put out the monitors and find out if people are exposed to higher levels of pollution we don't know about today," he said.

The announcement comes on the heels of an EPA announcement earlier this month that it is proposing stricter standards for ozone (smog) than were proposed in 2008. The proposed 2008 ozone standards would cause Pensacola, Panama City and six counties around Tampa Bay to be in non-attainment, according to DEP.

For more information on the EPA nitrogen dioxide standard, go to http://www.epa.gov/air/nitrogenoxides/ .

For more information on the proposed EPA ozone standards, go to http://www.epa.gov/groundlevelozone .