Florida joins with Ala., Ga. in seeking closed water talks

Alabama, Florida and Georgia have agreed to at least one issue in their dispute over water -- that their talks on a water agreement should remain confidential.

The three states have been in federal court since 1990 fighting over water from the Apalachicola-Chattahoochee-Flint river system. Alabama and Georgia want water for cities, agriculture and industry while Florida wants water to maintain the seafood industry in Apalachicola Bay.

Florida Gov. Charlie Crist and the governors of Alabama and Georgia met Dec. 15 in Montgomery, Ala. and the states have agreed on to hold more meetings towards reaching a water-sharing agreement.

Earlier this week, the states asked a federal court to issue an order maintaining the confidentiality of the talks. Such an order "may encourage the open exchange of information and proposals necessary to address the issues at bar, and discourage the improper dissemination of the same."

The request, submitted by Attorney General Bill McCollum on behalf of Florida, does not say when the talks should be reopened or when the order should be lifted. Both McCollum and Crist launched open government initiatives in Florida after taking office in 2007.

David McLain, policy advisor to the Apalachicola Riverkeeper group, said a confidentiality order would restrict public participation by groups and individuals who would be affected by an agreement.

"We believe that is a mistake," McLain said. "It denies the fundamental premise we have always adhered to -- that is, good decisions are made with consultation to the stakeholders, those most directly affected by the outcome of the decisions."

"Once you bar public involvement and public openness to those views," he said, "you are on a slippery slope for sure."

The states' request indicates that outside interest groups could be brought into the process if they sign a confidentiality agreement. But McLain said such agreements also are not helpful to public participation.

"We continue to seek stakeholder input and communication on the issue," she added. 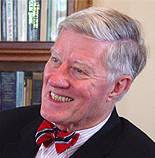 Former Florida State University president Talbot "Sandy" D'Alemberte, a former president of the American Bar Association, said confidentiality sometimes is needed in such talks. In 2001, D'Alemberte was appointed as mediator by the states during closed talks in the water dispute when there was a legal compact requiring open meetings.

"If you had all that discussion in open proceedings and open negotiations and it was reported, it would just not be the candid exchange you want to have," D'Alemberte said. But he also added that there remains a danger of a deal being cut without the public being informed or having the opportunity to object.