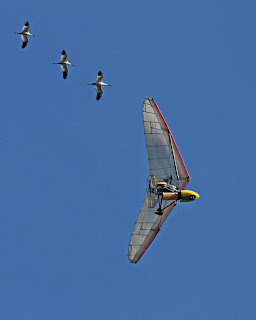 The birds were being led by Operation Migration pilots under an effort to re-establish a migrating population of the whooping cranes east of the Mississippi River.

Whooping cranes, standing nearly five feet tall with striking white plumage, were nearly wiped out by hunting and habitat loss in the middle 1900s with only one wild population left, migrating between Canada and Texas.

The Whooping Crane Eastern Partnership, which includes the Florida Fish and Wildlife Conservation Commission, began the effort in 2001 to raise crane chicks in captivity in Wisconsin and lead them to Florida.

On Wednesday, between 600 and 700 people were near the city of St. Marks to see the birds and ultralight aircraft pass overhead on their way to the refuge, refuge volunteer Carol Phillips said.

"To know that they are here and they are safe and hopefully they will make their flight north to (Wisconsin), it's just fascinating, totally fascinating and awesome," Marilyn-Sue Walsh told WCTV-TV. She drove from Brooksville to see the fly-over.

Another flock is heading towards the Chassahowitzka National Wildlife Refuge near Crystal River. The birds will be kept in pens at the refuges but return north on their own in the spring.

it is great to have a flock here at the St. Marks Refuge and north florida