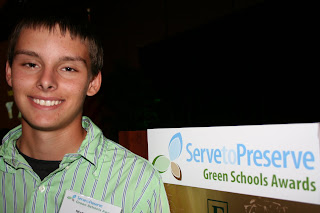 TAMPA -- Matt Mooney, 16, says dumpster-diving for aluminum cans isn't easy, but it's worth it.

During the past three years, Mooney, a Junior at Land O' Lakes High School, has collected 1.1 million cans, turning them into $15,000 cash. But he and his friends didn't keep the money -- it went to a local Habitat for Humanity program to build homes for needy families.

"It's all worth it," said Mooney, whose dumpster-diving efforts have made the Tampa Bay area evening news. "It's a lot of time we put into it. The benefit now and into the future will be a lot greater."

"For me, this has truly been an extraordinary evening and one that has been an inspiration," Florida Department of Environmental Protection Secretary Michael Sole said in presenting the awards.