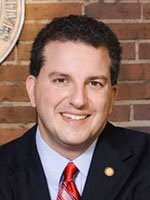 Joking that he had taken out "the nasty stuff" opposed by environmentalists, Rep. Jimmy Patronis said Friday his environmental permitting bill still is good for Florida's businesses.

The House quickly amended HB 991 on Friday and gave it final approval without questions or debate.

The bill would streamline the state permitting process to reduce lawsuits and delays, supporters said. Developers and industry groups supported the bill, while environmentalists on Thursday denounced it as one of the worst they had seen.

After eight hours of prolonged questioning on numerous other bills Friday, the Republican-controlled House kicked into warp speed, adopted a Democratic amendment that removed a major concern, and passed the bill 95-16 -- with hardly a peep from Democrats.

He described the hurried final vote as "bizarre," but Democrats could have slowed down the process by asking questions or debating and they didn't. Pafford said House members were worried their own bills wouldn't get passed if they raised questions.

Friday was the last day to act on HB 991 and other bills that were on the special order calendar, House Speaker Dean Cannon said. He placed the bill on the calendar Wednesday, bypassing the two remaining committee stops.

"We were trying to get lots of bills done," said Cannon, R-Winter Park. "We did that for Democrat and House [Republican] bills, some in less than 60 seconds."

Pafford offered an amendment that removed language that opponents said shifted the legal burden of proof from permit applicants to those who file legal challenges.

"We're still not happy with the bill but the Pafford amendment takes out the most offensive part of the bill," Draper said.

The Florida League of Cities and the Florida Association of Counties also had raised concerns about the bill. Patronis also offered other amendments including one to remove a prohibition on local rock mining regulations.

"Ask me nice questions because I took out all the nasty stuff," Patronis told the Florida Tribune.

He said the bill still is good for Florida because it reduces the time period for agencies to respond to permit applications and provides predictability for applicants. The bill also extends the Sept. 30 contamination cleanup deadline for 25 gas station owners to Dec. 31, 2012.

"Representative Patronis worked his [butt] off on the bill," said Scott Dudley, associate director of legislative affairs with the Florida League of Cities. "He has been a very fair arbiter of all the issues."