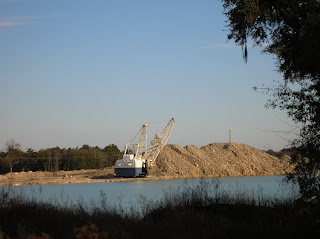 In a move described as a "sneak attack" by one environmental opponent, a House bill that supporters say would streamline the state permitting process was amended Thursday to prevent local governments from regulating rock mining.

The House Economic Affairs Committee adopted a 71-page strike-all amendment requested by Patronis that included the new aggregate rock mining preemption. The bill has evolved through a series of weekly meetings with supporters and opponents.

Stephen James, legislative staff attorney for the Florida Association of Counties, thanked Patronis for being willing to make changes in the bill. But he said the mining preemption "was never discussed and never brought up."

"This is the first we are seeing of it this morning," he said.

Eric Draper of Audubon of Florida called the new part of the bill bad policy that represents "a sneak attack."

"It is so offensive to the people who live in the communities where these rock mines are located," Draper said. "Often time in rural areas these mines clearly destroy the communities they go into."

Patronis said local land use regulations still would apply to the mines. "I had some sympathy with what various folks are dealing with in the [local environmental] permitting process," he said.

Groups supporting the bill include the Florida Engineering Society, the Florida Chamber of Commerce, Associated Industries of Florida and the Wetlands Mitigation Banking Alliance.

Groups that continued to raise concerns included the Florida League of Cities, the Florida Stormwater Association, the Florida Department of Transportation, Sierra Club Florida and Audubon of Florida.

The Florida Stormwater Association is concerned that the bill requires counties to go through the expensive process of seeking state approval for local environmental permitting programs.

Sierra Club and Audubon of Florida representatives said the bill unfairly shifts the burden of proof to challengers of permits rather than the permit applicant.

Rep. Geraldine Thompson, D-Orlando, said shifting the burden to challengers would have a chilling effect on citizen involvement. She offered an amendment to maintain the status quo but it was defeated on a voice vote.

The bill passed 17-0. The bill still has two committee stops. The Senate version of the bill, SB 1404, has not been heard in a committee.