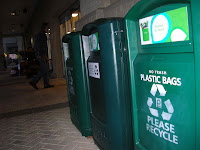 Representatives of stores and packaging industries slammed the Department of Environmental Protection today for a draft report's recommendation to tax and then ban plastic and paper bags in Florida.

DEP posted the draft report Oct. 15, then withdrew it two days later after criticism. Still, industry representatives said today they disagreed with the recommended tax and ban and said more regulation may not be needed.

"It was a thorough, well-researched piece of work," Fred McCormack of the Florida Dry Cleaners Coalition said, paradoxically adding, "We absolutely don't agree with any of the recommendations."

Environmentalists say plastic bags litter the landscape and harm wildlife that eat them or become entangled in them. Some local governments were considering banning bags until the Legislature in 2008 adopted a bill at the urging of the Florida Retail Federation.

The draft report was intended to prompt public comment. Instead it became a big controversy "on an apparent slow news day" for one newspaper reporter, Mary Jean Yon, director of DEP's Division of Waste Management, told a public meeting audience of about 50.

Representatives of the Florida Retail Federation, the American Chemistry Council, Wal-Mart and the American Paper Bag Council were among those who said that voluntary efforts are guiding the consumer trend toward reusable bags and recycling disposable bags.

Target has begun paying customers 5 cents for each reusable bag they bring into the store. CVS will issue store-credits to customers for bags they reuse, said Samantha Hunter Padgett, of the Florida Retail Federation.

Wal-Mart, which has 273 stores in Florida, has set a goal of recycling or reducing the use of plastic bags by 33 percent at its stores worldwide, said Cindi Marsiglio, the company's senior manager for public affairs and government relations in Tallahassee. The company also is experimenting in three California stores with not offering disposable bags and instead selling reusable bags for 15 cents each.

"There are a lot of exciting things happening," she said. "We just need to let it catch up with what the right product and time and demand on the customer is."

Critics who spoke at the meeting far outnumbered supporters of a bag ban. David Auth of Gainesville said sea turtles and birds die from eating plastic bags and that landscape views also suffer.

"People are irresponsible," he said. "The only way to make them responsible is to get rid of these plastic bags so they won't have them in the first place."

Osceola County Commissioner Brandon Arrington said plastic bags clog the county's stormwater drains and he doesn't think educational programs will halt the problem. He said he would ask his county to take action if the state doesn't act on recommendations.

"I think the state approach is much better for retailers as a whole," he said.

DEP won't post another draft report before the recommendations are sent to the Legislature because there isn't enough time, Yon said. She said her staff also is working on the recommendations due Jan. 1 for increasing the state's recycling goal from 30 percent to 75 percent in 10 years.