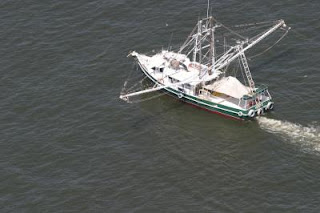 By Florida State University and FloridaEnvironments.com

A team of researchers from Florida State University, Duke University and the National Marine Fisheries Service will study the environmental and economic impacts of the vast “dead zone” in the northern Gulf of Mexico on shrimping in the region

Dead zones result from low oxygen caused by algal blooms that render waters inhospitable to animal life. That's a potentially catastrophic issue for the Gulf shirmping industry, estimated to be worth about $500 million annually, according to Florida State.

FSU will serve as the lead institution for the collaborative project, which is funded by a four-year, $702,969 grant from the National Oceanic and Atmospheric Administration.

The Gulf of Mexico’s increasingly severe dead zone is one of the world’s two or three largest and the biggest one that affects a U.S. fishery. It forms in the late spring and summer off the coasts of Louisiana and Texas, covers between 7,500 and 8,500 square miles -- roughly the size of New Jersey -- and in some years stretches over nearly 12,500 square miles.

“Previous studies of hypoxia in the Gulf of Mexico have linked it to nutrient-rich runoff that fuels the algal blooms,” marine ecologist Kevin Craig, a faculty member at FSU's Coastal and Marine Laboratory, said in the university's news release.

“Most of the nutrients seem to come from agricultural activities in the Mississippi River watershed, which drains 41 percent of the continental United States and includes major farming states in the Midwest,” Craig said. “Our research team intends to more effectively assess the likely effects of nutrient loading and hypoxia on fisheries, the associated economic costs of habitat degradation for fishermen and others who depend on coastal resources for their livelihoods, and the benefits of environmental policies to reduce nutrient pollution.”