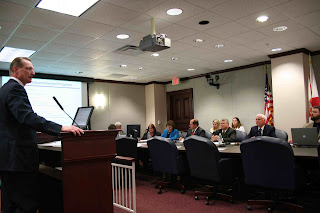 With the downturn in the state's economy, Florida's conservation land-buying program is sucking up an increasingly larger share of tax revenue from real estate transactions, a state finance official told House members today.

Florida's land-buying program is the largest in the nation, having acquired more than 2 million acres since 1990. But the program received no new money this year for the first time since 1990 in part because of House concerns about its cost.

Yet the annual cost of repaying bonds to buy land increased from $375 million to $449 million during the same period, Watkins told the House Natural Resources Appropriations Committee. That debt service for bonds increased from 9 percent of documentary stamp tax revenue in 2006 to 41 percent in 2010.

Rep. Ralph Poppell, R-Vero Beach and House committee chairman, said the presentation was "an eye-opener" that he said shows that land-buying supporters frequently underestimate the programs cost. But supporters representing The Nature Conservancy dismissed the presentation as unremarkable because they said similar cost figures were presented by Watkins to the Legislature last year.

Meanwhile, the Division of Bond Finance in early 2010 is expected to sell the remaining $250 million in bonds approved by the Legislature in 2008, Watkins said. The sale of those bonds was delayed earlier this year because documentary stamp collections were lower than projected, which Watkins said discouraged investors from buying the bonds.

Selling the bonds will allow the Florida Department of Environmental Protection to move forward on land purchases that now are stalled, said Andrew McLeod, director of government affairs for The Nature Conservancy's Florida chapter.

"We are hopeful (bonds will be sold) as soon as possible," he said. He said there is an urgency to buy now because landowners are more willing than ever to sell and because land prices are down.

Supporters have said the Legislature can continue the program for another year simply by appropriating $12 million to $15 million for interest on the $300 million in bonds. But Poppell said Watkins' presentation shows it isn't that simple.

Agriculture Commissioner Charles Bronson repeated his argument made in Cabinet meetings against additional land purchases. He said they hurt property tax collections by local governments -- even though Florida Forever also supports working ranches, which he advocates.

McLeod said the land-buying and affordable housing programs were considered the main recipients of the documentary stamp tax revenue when Florida Forever's predecessor program was created in 1990. He said other money later was siphoned away for transportation and general government operations as documentary stamp revenues soared during the real estate boom.

The stabilization and expected increase in revenue helps the program as supporters seek new funding for it in 2010, McLeod said. There is broad public support for borrowing money to buy land for protection of wildlife and water supplies, he said.

"We will borrow today to buy an asset... that is only available today and is so valuable to the public that it warrants borrowing," he said.