My View: Al Burt, champion of Crackers and Old Florida, will be missed 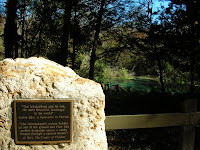 There was a lot of sad news at our household last week, but the saddest may have been the death of author Al Burt.

Al was a Miami Herald reporter and editor before he became a roving columnist for the newspaper in 1973. He chronicled the people and places that would otherwise be lost in the sweep of development across the state.

He made the term "Cracker" a badge of honor in some conservation circles, swiping it back from the column of racial epithets. Writing in The Tropic of Cracker, he said:

"Crackers inhabit the Tropic of Cracker, and they are called that either because they are natives of Florida or because they so love the native things of Florida that they have been naturalized by experience and exposure. People argue about the use of the word 'Cracker' but it does not matter. In Florida, the word comes out of state history.

"Old-time cow hunters drove great herds of cattle across Florida to shipping points, popping long cowhide whips so loudly that they could be heard miles away. Because of this they became known as Crackers.

"The Florida definition has nothing to do with race. It is a tribal feather, not a street slur."

Al Burt's description of the Ichetucknee River now is preserved on a plaque at the head spring inside Ichetucknee Springs State Park.

The Ichetucknee's waters "bubble up out of the ground and flow like melted diamonds across a sandy bottom through a natural forest," he wrote.

My wife, her brother-in-law, Larry, and I ate lunch there on the Friday after Thanksgiving, the day before Al died in Jacksonville from a chronic illness. I wanted the picnic table that was closest to the plaque so that I could absorb some of Al's good vibes.

Florida needs its poets and authors. Knowledge of what's here and recorded memories of what's been lost are the best defenses we have against the grinding change all around us.

Al, we'll miss you here in Florida. But you won't be forgotten.