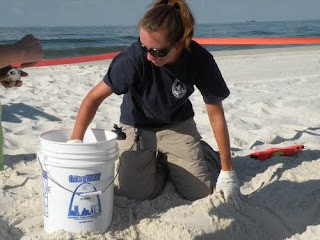 Responders remove sea turtle eggs from a nest on the Fort Morgan Peninsula in Alabama on June 27. U.S. Fish and Wildlife Service photos by Bonnie Strawser.

Bad weather hampered oil spill cleanup operations Thursday as state officials weighed in on efforts to help wildlife, fishermen and counties that are battling the spill.

Sen. Bill Nelson, D-Melbourne, wrote a letter to Gov. Charlie Crist stating that BP had provided the state with $50 million to respond to the oil spill and that counties are seeking compensation for their spill costs. (Click here to download the letter).

The Florida Fish and Wildlife Conservation Commission announced a plan with BP and other federal partners to respond more quickly to reports of oil-soaked birds in the Florida Panhandle. (Click here to download the plan.)

The state Emergency Operations Center reports that 206 birds have been recovered since the spill began in April. Seventy-nine were recovered dead, 60 died in captivity, 64 are being rehabilitated and three have been released. The birds are primarily northern gannets, brown pelicans and pied-billed grebes, according to a daily situation report. 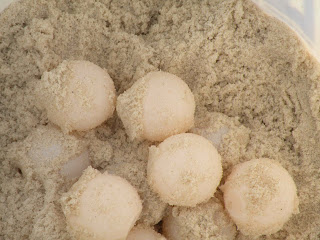 The Coast Guard and BP unified command announced that Federal Express will help move sea turtle eggs from hundreds of nests along Gulf beaches affected by the spill to Florida's east coast.