Sink released the 10-page plan at a news conference in Miami. The BP oil spill in the Gulf showed the economic threat of over-reliance on oil and lost economic opportunities, Sink said in a statement released with her plan.

She said she would seek more federal economic stimulus dollars to help pay for renewable energy projects and to train unemployed workers for manufacturing jobs associated with clean energy. 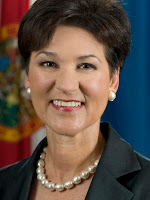 "We lag behind many states in renewable energy production and manufacturing," she said, "and the absence of a clear vision and a consistent energy policy is costing Floridians good-paying, sustainable jobs."

Sink endorsed the idea of a renewable energy requirement, called a "renewable portfolio standard," for utilities as long as it doesn't affect ratepayers. She said 29 other states have adopted an RPS.

Gov. Charlie Crist in 2007 proposed a 20-percent RPS but the Legislature refused to ratify it in 2009.

Independent candidate Bud Chiles called for a 20-percent RPS earlier this month and said he would pump $15 million annually into the state solar energy rebate program. It expired June 30 with a backlog of 15,826 applications totaling $52.6 million.

Sink made no mention in her plan of the rebate program. She said only that she will work to develop an "aggressive" solar program for homes and businesses. Neither Republicans Bill McCollum nor Rick Scott have offered a renewable energy plan yet.

In her plan, Sink also said she will build off a 2008 report by the Governor's Energy and Climate Action Team which produced 50 recommendations that have not been implemented.

Sink said she will promote Florida' s new Property Assessed Clean Energy (PACE) program that was approved by the Legislature as HB 7179 in April. The program allows homeowners to borrow against their property value for solar panels and other energy or storm-resistance improvements.

Nuclear energy will continue to be a part of Florida's future, Sink said, but she raised concerns about the cost of new plants. She also offered support for ocean energy research, biomass electricity, biofuels and smart grid technologies that reduce energy costs and improve reliability.