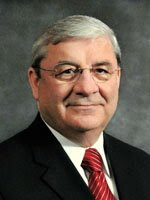 House Speaker Larry Cretul told fellow House members on Thursday they could expect a "very short" stay in Tallahassee for next week's oil drilling special legislative session, suggesting there would be no serious consideration of a drilling ban.

Cretul, R-Ocala, made his announcement shortly after Senate President Jeff Atwater sent his own letter to the speaker suggesting that another session should be held in late August or early September to consider economic issues related to the oil spill. Atwater said the issues were too complex to take up during the special session now scheduled from July 20-23.

Atwater has expressed support for a constitutional ban on drilling, but House leaders have been dead set against it. "Rushing to amend the constitution at the last possible moment because of an accident hundreds of miles from our jurisdiction does not typify deliberation and responsible legislation," Cretul wrote to Atwater.

Lawmakers must act before Aug. 4 in order to put a constitutional amendment on the 2010 ballot.

Atwater's letter made no mention of the governor or the special session. But in an apparent jab at Crist, the Senate president wrote that residents "will not be well served by hastily drafted legislation designed more for political consumption than meaningful economic relief."

Crist last week called the special session in response to the ongoing BP oil spill. House Republican leaders say a special session isn't necessary because offshore drilling already is banned in state law, though they did try to lift the ban in 2009 with a bill that the Senate refused to consider.

HB 7C, introduced Thursday by Rep. Keith Fitzgerald, D-Sarasota, and Rep. Rick Kriseman, D-St. Petersburg, would allow voters to decide whether to amend the state constitution to ban drilling in Florida waters, which extend 10.36 miles into the Gulf of Mexico and 3.45 miles into the Atlantic.

Also Thursday, Rep. Sandy Adams, R-Oviedo and a candidate for U.S. Congress, said she was filing a resolution to censure Crist for holding the special session, which she said could cost the state $50,000 per day. She said the session was being held so that Crist could grandstand for his U.S. Senate campaign.