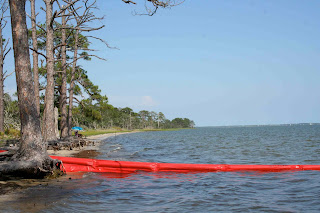 The BP oil well since April 20 has fouled Escambia County beaches, threatened the state's tourism economy and caused political upheaval. A special session called by Gov. Charlie Crist ended Tuesday when the Legislature refused to vote on his request to allow voters to put an oil drilling ban in the Constitution.

The National Hurricane Center said a tropical storm wave that was 700 miles southeast Miami had a 50 percent chance of becoming a tropical storm. Models showed the storm moving northwest across the Florida peninsula possibly on Friday toward the Panhandle or the BP oil spill site off the Louisiana coast.

There was little oil threatening Florida on Wednesday with some sheen and tar balls only off the western Escambia County coast, according to state officials. But retired Admiral Thad Allen, the federal incident commander for the oil spill, said the storm could force the reopening of the capped oil well to relieve pressure if the site had to be abandoned.

On Wednesday, the well remained capped for the sixth straight day as work continued on a relief well to permanently shut the well. BP and federal officials were planning simultaneously for an alternate "static kill" operation while also preparing to possibly abandon the spill site should the storm approach.

"We have to watch the weather very, very carefully now and adjust our plans accordingly," BP Vice President Kent Wells said. An additional plug was placed in the undersea well should there be a need to abandon the site during a storm, he said.

The state and Coast Guard were preparing to remove more than 150 miles of boom deployed by the Coast Guard, according to spokeswomen for the federal Joint Unified Command and the Florida Department of Environmental Protection.

The oil boom would become ineffective in stopping oil from reaching the shore during a storm because of the waves, according to a Coast Guard letter sent Wednesday to Crist. State and federal officials said the boom also could harm shoreline marshes and other natural resources if it became dislodged during a storm.

(Story courtesy of the Florida Tribune. Story and photo copyrighted by Bruce Ritchie and FloridaEnvironments.com. Do not copy or redistribute without permission, which can be obtained by contacting brucebritchie@gmail.com.)
Posted by Bruce Ritchie at 7/21/2010 09:22:00 PM