All Florida waters reopened to fishing 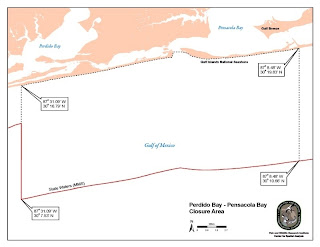 Florida on Saturday was reopening state waters near Pensacola that were closed to fishing because of the BP oil spill, Gov. Charlie Crist said late Friday.

Waters along the 23-mile stretch of coast had been closed since June 13 when oil was washing ashore at beaches in Escambia County. Fishing was allowed only for catch-and-release. The area was reopened because lab analyses showed fish from the area are safe to eat, according to state officials.

“The reopening of gulf waters for fishing is positive news for Floridians who depend on this important industry and for our recreational users and tourist,” Crist said in a written statement.  “Florida seafood is safe to eat and I thank the Food and Drug Administration for completing the test so quickly."

The governor's office said oil had not been seen in those previously closed waters "for some time" during flights over the Gulf. However, beaches in Escambia, Santa Rosa and Walton counties remain under advisories against swimming because of possible oil in the water.