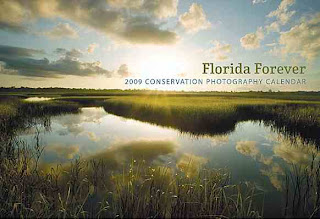 Copies of the 2009 Florida Forever Conservation Photography Calendar were distributed by groups and agencies at the Capitol on Monday. Image published with permission from University Press of Florida.

The poll of 600 registered voters found that 81 percent had a "positive impression" of the program and that 67 percent supported continued funding for the program. The funding support was the same for Democrats, Republicans and those with no party affiliations, according to The Nature Conservancy.

The Florida Forever Coalition commissioned the poll by Public Opinion Strategies on March 18 and 19. The error rate for the poll was 4 percent.

Florida Forever and its predecessor program, Preservation 2000, have received $300 million a year since 1990, leading to the purchase of 2.4 million acres, according to the Florida Department of Environmental Protection.

Neither the House nor the Senate versions of the proposed 2009-10 budget include money for Florida Forever. Gov. Charlie Crist has said he remains hopeful the Legislature will find money for the program. (See April 2 story at FloridaEnvironments.com)

At a rally Monday at the Capitol, state CFO Alex Sink, Sen. Paula Dockery and environmental group representatives urged support for the program.

"These are tough economic times, but let's celebrate," Sink told FloridaEnvironments.com. "We have preserved over 2 million acres of Florida's land. That's enormous. We are the envy of the country."

With the Legislature working to reduce a $6 billion deficit projected for next year, Sink also said this isn't the year to provide the full $300 million for Florida Forever.

"That will all be worked out in the next four weeks" before the legislative session ends on May 1, she said. "This is a juggling game. You've got to put all the pieces of the puzzle together and see what monies are available perhaps to do some scaled-back version of the program."

Greg Chelius, Florida state director of the Trust for Public Land, said legislators should "just use common sense" so that future generations can enjoy the outdoors.

"I beg of the Legislature to put on their hats that say 'Common Sense' and go ahead and vote to fully fund Florida Forever, the nation's greatest land-conservation program," Chelius said.

Sen. Paula Dockery, R-Lakeland, also said the Legislature should try to find some money for the program to take advantage of good land deals that are available now because of the economic downturn.

"Even in a tight year there are many of us in the legislative process who feel we should continue the program even if it is for a lesser amount," Dockery said.