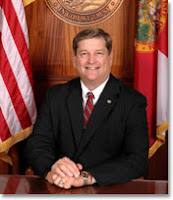 Agriculture Commissioner Charles Bronson during a Cabinet meeting today challenged other supporters of the state's Florida Forever land-buying program to determine how many more acres the state needs for conservation.

The state has purchased 2.4 million acres since 1990 under Florida Forever and a predecessor program. Gov. Charlie Crist proposed $300 million for the program in 2009-10, but neither the House nor Senate have included money for it in their proposed budgets.

Florida Department of Environmental Protection Secretary Mike Sole responded that nearly one-third of the lands on the state's purchase list are "conservation easements" -- the very type of project that Bronson advocates. Crist was absent because bad weather prevented him from flying back from Tampa.

The Nature Conservancy last week issued poll results showing that 81 percent of Floridians have a positive impression of Florida Forever. Another report issued last month by TNC found that visitors to Florida's 161 state parks give the state economy a $1-billion economic shot in the arm.

But Bronson countered that the state should pursue more conservation easements in which the state purchases development rights but landowners retain ownership while paying taxes and producing products.

"We are looking at those tools to shape the future of Florida Forever," Sole, the DEP secretary, responded.

After the meeting, McLeod said Bronson had raised a good question about how many acres the state needs to own. But McLeod said it's a difficult question to answer -- and one the state is working on.

"We know there are habitat needs not being met today for any number of (threatened and endangered) species," McLeod said.