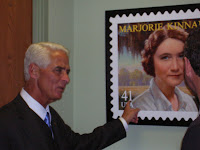 Gov. Charlie Crist said today he called House Speaker Larry Cretul on Monday to urge the House to take action on a bill that would set requirements on utilities for producing renewable energy.

HB 1319 would adopt the recommendation of the Florida Public Service Commission and Gov. Charlie Crist that utilities produce at least 20 percent of their energy from renewable sources by 2020. The bill was filed Feb. 27 but hasn't been heard by a House committee, prompting criticism from House Democratic leader Franklin Sands on Monday.

During a tour of the Florida Department of Environmental Protection headquarters today, Crist told FloridaEnvironments.com that he "would share that encouragement" and that he had also asked Cretul for the House to take action.

"I spoke, in fact, with the speaker yesterday about the renewable portfolio legislation," the governor said, "and so I think we are going to start to see movement there."

"I called him because I thought there was a need and I was very encouraged by the nice response I got," he said.

A spokeswoman for Cretul today said the conversation Monday was "very cordial" and the House is waiting to see what the Senate does.

The Senate Environmental Preservation and Conservation committee Monday voted unanimously to approve SB 1154, which would require at least 15 percent renewable energy and allow an additional 5 percent of nuclear as part of a proposed "clean" energy standard. Crist said today he was encouraged the committee had approved an energy bill.

During his tour of DEP, the governor signed a "clean boating" pledge card and marveled at historic Everglades documents and portraits of Marjorie Kinnan Rawlings and Marjory Stoneman Douglas. The DEP building, with its reflective "copper-top" facade along Interstate 10 in Tallahassee, is named for the late Douglas, an author whose "The Everglades: The River of Grass" book championed Everglades protection.

Crist, who has received praise from environmental groups for his stance on climate change, said the visit to the DEP headquarters was his first.

The governor was briefed on the status of Florida's oil drilling buffer in the Gulf of Mexico, the legal fight over water from the Apalachicola-Chattahoochee-Flint river system, recreation along the Suwannee River "wilderness trail" and DEP's "green lodging" certification program for hotels.

Nice blog Bruce,
I am encouraged to hear about this proactive movement from the Governor to promote renewable energy. We believe that nuclear does not belong in the RPS, but are glad to see that the it will be limited to only 5%, leaving 15% for real renewable energy.

I am interested to see what the House comes up with.

Thanks Melissa. It will be interesting to see what comes from the House. And thanks for adding the environmental groups position on nuclear.