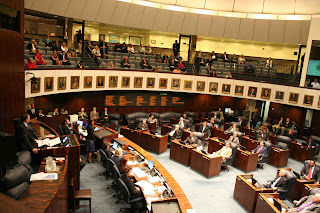 By Bruce Ritchie
Some environmentalists say their low expectations for the legislative session have been met.

Heading into the final week of the session that began March 3, the prospects range from uncertain to bleak for Gov. Charlie Crist's energy bills, conservation land-buying and for a Senate measure aimed at protecting Florida's springs. But some environmentalists expected worse.

But Wade Hopping, a veteran industry lobbyist, said environmental issues have just gotten lost in a year when so much attention has been focused on the state's $6 billion budget deficit and a slowing economy.

In the House, a proposal to lift the ban on drilling for oil in Florida waters caught environmental groups off-guard. The measure was moving swiftly after first being proposed last week and it could be used as a chip against the governor's energy proposals.

The Senate and House have drifted far apart on environmental issues with the House having refused to take up Crist's proposals to produce more electricity from renewable energy and to require more fuel-efficient cars.

Sen. Lee Constantine, R-Altamonte Springs and chairman of the Senate Committee on Environmental Preservation, suggested a stark contrast exists between the House and the Senate on environmental legislation.

Rep. Adam Hasner, R-Delray Beach and House majority leader, responded that there are "different approaches" to dealing with the environment and that he didn't want to get into a spat with the senator. Hasner said drilling for oil would reduce dependence on foreign oil and would be done in an environmentally-friendly way.

"Some of the other legislation you are referring to is legislation that members of committees either chose not to hear or didn't think was something that was part of a discussion this year," Hasner said.

Rep. Keith Fitzgerald, a Sarasota Democrat, said the House leadership lost time after Rep. Ray Sansom, R-Destin, stepped down as House speaker just prior to the start of the session.

"What we are seeing is not restricted to one aspect of policy," Fitzgerald said. "It's everywhere."

"It's just a matter of fact that things are not moving as smoothly as they usually do," he said.

Hasner called the remarks "a cheap attack" and baseless even though Fitzgerald said he wasn't trying to take a shot at House Speaker Larry Cretul.

Hopping, who represents the Association of Florida Community Developers along with automobile manufacturers who opposed Crist's "clean cars" bill, said House members, because their districts are smaller, are more sensitive to the economic downturn.

Other environmental initiatives, he said, got lost in the year when the economy and budget have dominated.

"It's hard to focus on things that are important when you have crises," Hopping said. "This other stuff pales in importance."

ENERGY BILLS
Asked on Wednesday after an Earth Day celebration at the Capitol whether the House was bucking his environmental agenda, Crist said, "Let's find out May 1 (the last day of the legislative session)."

SPRINGS BILL
Constantine has attached his springs bill, SB 274, to a regulatory reform bill in the Senate that was supported by the home-builders and developers who opposed his springs bill. There is no House companion bill to SB 274.

Hopping said the springs bill riled many groups because it was so far-reaching.

"I think that has its own self-inflicted wounds," he said.

FLORIDA FOREVER
The Florida Forever and its predecessor land-buying program has received $300 million a year since 1990, leading to the purchase of 2.4 million acres. After both the House and Senate initially refused to provide money for the program because of the state's $6 billion budget deficit, the Senate now is proposing $50 million both for Florida Forever and another $40 million Everglades restoration.

"Getting away with some money for Florida Forever and the Everglades -- which seems increasingly likely -- that is a bright spot," said Draper, the Audubon lobbyist.

REGULATORY REFORM
One environmental bill that is moving in the House would extend development permits by three years. Environmental groups had opposed the regulatory reform bill but are OK with it now that restrictions against city and county environmental regulations have been removed, Draper said.

Legislators missed opportunities and passed on ideas to provide more temporary permitting relief for businesses that deal with permitting and regulations, Hopping said.