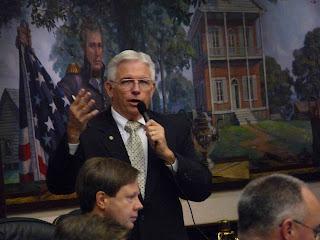 The Florida House today gave preliminary approval to a bill that would lift the ban on oil and gas production within three miles of the coast.

HB 1219 would require the governor and Cabinet to approve nominations and solicit bids for leases between three and 10.5 miles from the shoreline, according to Rep. Charles Van Zant, R-Keystone Heights, and sponsor of the bill. He said oil and gas production in Florida would produce 16,000 jobs.

The bill previously only called on the Florida Department of Environmental Protection to draft a plan for allowing oil production while protecting the environment. The House Policy Council on Tuesday voted 17-7 to amend the bill to allow drilling -- with nine days left in the legislative session that began March 3.

"That part concerns me," Crist said after a tree-planting ceremony outside the Capitol to mark Arbor Day. "Whenever you do something like that, you want to make sure it is well thought out, that it is done in a very deliberate manner and that people have an opportunity to review it in a reasonable way."

"And the closeness of it concerns me too," he added, in an apparent reference to the bill allowing drilling to occur within three miles of shore.

“I also think it is unconscionable that a bill that could threaten our economy is being passed at the 11th hour, without any significant debate, serious study or real time to hear from Florida’s citizens," Sink said in a written statement.  "Floridians deserve to have government in the sunshine -- this bill is government in the dark of night.”

The bill was passed on second reading without a vote. Debate and a final vote will occur on third reading, which has not been scheduled.

During more than an hour of questions about the bill on the House floor, Van Zant said he had seen the amendment for the first time on Monday night when it was sent to him from the Legislature's bill-drafting office. The amendment was offered by Rep. Dean Cannon, R-Winter Park and House Speaker-designate in 2010.

"I think it's a good amendment," Van Zant said. "It gets us where we need to go."

In response to questions mostly from Democratic House members, Van Zant also said oil and gas production rigs would not be visible above the water's surface nor would they interfere with military aircraft training missions over the Gulf of Mexico. Wells would be dug by ships which would leave, he said, and oil would be produced and pumped to facilities onshore by underwater pumps.

He said failures of oil rigs during hurricanes Katrina and Rita had produced minimal spills that were contained by oil companies.

"I believe the free enterprise system itself will dictate they (oil companies) give us the safest production measures in the world," Van Zant said.

Associated Industries of Florida has launched an advertising and public relations campaign in support of the HB 1219, purchasing full-page newspaper advertisements and commercials on television stations.

"In the worst economy of our lifetime -- a bold plan to meet our energy needs, grow our economy and protect our environment," the advertisement states. It refers readers to the Web site EnergyFla.com.

HB 1219 requires a $1 million payment to submit a bid to purchase oil and gas leases. The governor and Cabinet would be required to accept nominations for lease areas by Sept. 1 of each year.

Royalties from oil and gas leases would provide $300 million a year for the Florida Forever conservation land-buying program. The bill also requires that $20 million be provided for beach restoration projects and another $20 million for local governments within the counties where leases are issued.

Crist, whose bills to require more renewable energy and fuel-efficient cars are stalled in the Legislature, said there had been attempts by the Legislature to link adoption of his energy bills with lifting the ban on oil drilling.

Such linkage is "kind of an ironic marriage, if you will," Crist said. "I think we still have a chance to do what's right."

Photo of Rep. Van Zant during debate courtesy of the Florida House.