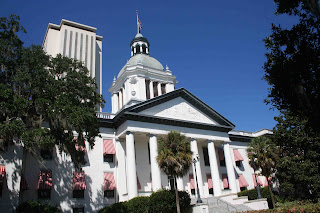 Growth management, fertilizer and septic tanks are some of the environmental issues awaiting action by the Legislature on Friday, its final scheduled day of the regular session.

Renewable energy, permitting and growth management were the big three issues heading into the session. There also was an outcry from some rural residents against last year's requirement that septic tanks be inspected every five years.

Gov. Rick Scott, in his 2011-12 budget request, proposed eliminating the Florida Department of Community, calling the agency a "job-killer" despite its approval of 1.5 billion square feet of new commercial and office space and nearly 600,000 housing units since 2007.

The Senate on Thursday voted 30-9 to approve the bill. Then the Senate brought it back for reconsideration and delayed action after Sen. Nan Rich, the Senate Democratic leader, reminded Senate President Mike Haridopolos that she objected to holding the final vote.

The quick vote left some environmentalists immediately scratching their heads.

"That is a fundamental change to 25 years of growth management law," said Charles Pattison, president of 1000 Friends of Florida. "We are surprised nobody asked any questions about it."

The permitting issues have largely been resolved against environmentalists. They denounced the HB 991 permitting bill last week, then got a provision stripped that shifted the burden of proof to those who file legal challenges against state permits.

But on Thursday the House gave final approval to the HB 993 rulemaking bill that added the burden of proof provision. The Florida Department of Environmental Protection requested the shift, saying the process still would be open and transparent.

“We are disappointed that DEP lobbied to reduce citizens’ rights to challenge harmful permits," said Eric Draper, executive director of Audubon of Florida. "If the governor signs this bill, citizens faced with stopping bad environmental projects will lose an important legal right.”

SB 2078 and HB 7217 would have allowed utilities to charge customers $375 million for renewable energy projects over five years was opposed by some business groups as too costly. Scott raised concerns about utility rate increases.

"The reason no energy bills passed is because I feel the power companies took advantage of the new legislative chairs on both sides (House and Senate) who were not necessarily as strong and familiar with their issues as they should be," Bennett said. "Consequently they loaded up the energy bills so huge they would not pass."

A big question remaining on the final day was whether either septic tank bill would pass. HB 13 would simply repeal the inspection requirement while SB 1698 would repeal it while limiting the scope of local programs.

The Florida Association of Home Builders and Florida Onsite Wastewater Association supported SB 1698. Environmentalists were beginning to lean toward HB 13 instead because it would return to the status quo of allowing local inspection program without restrictions from the state.

Another bill still in play is HB 613, which would ease restrictions on wastewater utilities that dump treated sewage into the ocean. Environmental groups oppose the bill because it would delay required wastewater plant upgrades.